Relocating from Culver City – which had served as NFL Media’s operational hub since the launch of NFL Network in 2003 – NFL Los Angeles is a 450,000 square foot Class A building with 214,063 square feet of office space and 74,922 square feet of studio and studio support space to serve as the home for NFL Network, NFL.com, NFL RedZone, the NFL app and many other department’s supporting the league’s media and business operations.

„Since the launch of NFL Network in 2003, the NFL and its media operations have become a go-to source for news, entertainment and engagement for millions of football fans around the globe,“ said David Jurenka, Senior Vice President of NFL Media & General Manager, Los Angeles.

„We are thrilled to relocate our operations into a space that puts us closer to the game than ever before and places the NFL at the center of what will be the next great global entertainment destination with the amazing SoFi Stadium in our backyard. We look forward to the opportunity to establish the NFL as a recognizable presence within Hollywood Park and the broader Inglewood community.“

NFL Los Angeles is a state-of-the-art technical facility designed for multi-stage productions. Flexible for traditional digital and social content, and scalable to any production format in the foreseeable future. The league’s new West Coast home provides all NFL employees with a top user experience with available feeds, monitoring and visibility, along with high-end workspaces, ample collaborative areas, sunlight, green space and much more.

On Thursday, September 9, NFL GameDay Kickoff airs at 3:00 PM and 6:00 PM ET on NFL Network, marking the first ever broadcast from the new studio. Host Rich Eisen is joined by analysts Kurt Warner, Michael Irvin and Steve Mariucci, analytics expert Cynthia Frelund, and others on the show, taking viewers up to kickoff between the Dallas Cowboys and Tampa Bay Buccaneers. 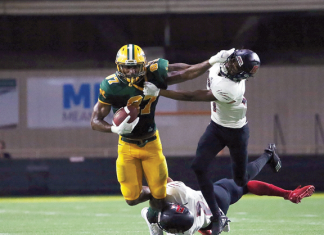