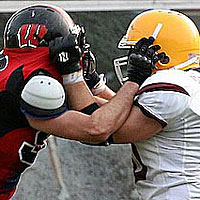 It was the first attempt the Wolves had to try to get back at the team that changed their whole season and what they had accomplished all of that year in only about 100 seconds. Full story by Goran Košutić.
Like it’s been for most of the 2008 season though, the attempt failed, miserably in fact, but the playoffs are in a way a new season altogether.

Even with a 5-5 record — quite different than their 1-loss campaign of 2007 — the Wolves made it to the postseason, but the end of the season for them, the last two games to be exact, makes it look like a return trip to the finals will be a long shot. After winning two games at the start of the fall season, the Wolves finally lost any hope of winning the North with a loss to a depleted Gladiators team, before being crushed in Bratislava, by a two win team at the time.

‚This is not the team of last year. We lost several key players and we are trying to get younger kids from our other teams to grow up and play at a higher level. This is their first year and we have to be patient with them. The last two games proved that the CEFL is a strong league indeed … Our intensity was really down in both games. We already made the playoffs and I believe that most of us were looking forward to the semifinals. In fact, these losses gave a wake-up call to our players, young and veteran, to realize how hard they have to work.”, says Krisztián Piros, the Wolves receiver.

One of the new guys on the team is the young quarterback Mark Bencsics — he and Attila Lendvai shared the load leading a Wolves offense that was different than last year’s. More passing and that, despite the two quarterbacks not being on the level of their last season’s one, gave an opportunity to Piros and other receivers on the team to be a more important part of the offense.

‚My season is only second to the success of the team. I want to help my team with as many points as I possibly can — I have 11 touchdowns, 8 receptions, 3 punt returns — but at the end of the day we have to get a win. Any time a player puts himself ahead of the team’s success things will break down … We do have great play makers in our team and they all contributed during the season. I would not score this many times without them.”

Though with each passing game between these two teams the memory of the final fades a little bit, it’s hard to say we’re already at a point where what happened is irrelevant. It was only a year ago the Wolves lost a game they were on the verge of winning, with things starting to go downhill after Piros caught a 78 yard touchdown pass from Vasyl Yordan to put his team up 20-0.

”Vukovi is a very good team. Their players have good intensity and we learned the hard way, they do not give up until the whistle blows and that is why I love to play against them.”

After joining the league last year, the Wolves have gone 0-3 against the Vukovi. Coming to Belgrade for the CEFL Bowl last year, they had just one of those, and that one came in a game that was more about prestige, than of importance, with their third string quarterback playing. Things are now much different — the Vukovi are still one of the two dominant teams in the league at this point, but the Wolves are not the other one anymore. Saturday from 4PM in Belgrade, the Wolves are unlike last year the clear underdog, but it’s a chance for them to turn things around — this time, for the better.