USA cruises past Austria to reach IFAF U19 Gold Medal Game
Team USA ran off 63 unanswered points in the final three quarters on the way to a 70:7 win over Austria in the second semifinal at the IFAF U19 World Championship at Burger Stadium in Austin, Texas on Wednesday night.
Team USA will meet Canada in Saturday’s championship game. Austria will face Japan for the Bronze Medal.
"I think our kids are getting more comfortable with what we do," said USA head coach Steve Specht. "Early in the game, Austria came out and played hard, they played tough to start. I think our team speed wore them down.
"We still have an issue with penalties. That’s getting better, but it’s a process. Unfortunately, we don’t have a lot of time to get that fixed. We’ve got to get ready right away for Canada. We’ve got to get better now."

Austria had some success on the ground on their opening possession, reaching the USA 35 before quick-kicking on 4th and 9 from the 38. Running back Andreas Hofbauer carried six times for 24 yards on the drive and had 48 yards on 14 carries in a team MVP performance.
Austria’s next drive ended on a much more positive note as they tied the game late in the first quarter on a one-yard plunge by H-back Felix Stadler. The drive covered 53 yards in five plays with the big blow being a 36-yard end around by Thomas Torta to open the drive.
"The fact that the first quarter was tied at 7-7 was quite an achievement," said Austria coach Horst Obermayer. "At the end of the third quarter it got quite painful, but we felt we had nothing to lose. We had tried to be tricky with the onside kick at the start of the game so we tried everything we could to beat the USA. The players will now go for bronze against Japan and the only questions surround some of the injuries we have."
Team USA retook the lead at 14:7 with just under seven minutes left in the half on a one-yard sneak by USA team MVP quarterback Brayden Scott. Running back Lorenzo Woodley did the heavy lifting on the drive, rushing for 36 yards on four carries.
"Austria was a very good opponent," said Scott. "Give them the respect they deserve. They came out with more intensity than we did. Once we got clicking and new that they came to play, too, we came out and did our duty and did well.
We knew what we wanted. We want that gold medal, and we know we won’t get it if we don’t win."
Austria went deep into the playbook on the next series with receiver Philipp Kern throwing a pass off of a jet sweep but USA safety Darius Mosely intercepted the pass and returned it 28 yards to the Austria 45. Following a 40-yard run by Conor Hundley, Scott found Folston from five yards out and the USA lead stood at 21:7.
Dashon Hunt intercepted a Christoph Gubisch pass at midfield on the next series and returned it to the Austria 21. Two plays later Scott hit Rodney Adams with a 19-yard scoring strike for a 28:7 lead with 2:47 left in the half.
Austria looked to run out the clock on the next series but Gubisch fumbled on a sack by Kight Dallas. Lance Duran picked up the loose ball at the Austria 19 and returned it down to the five. Woodley scored one play later for a 35:7 lead going into the break.
Team USA extended the lead to 42:7 on a 39-yard touchdown pass from Scott to Adams on the American’s first series of the third quarter.
Cameron Birse replaced Scott at quarterback on the next series and threw an eight-yard touchdown pass to Desmond Wyatt to up the lead to 49:7 with 2:55 left in the third quarter.
Khari Harding picked off Gubisch on the first play of the next series and returned it 18 yards to extend the lead to 56:7. Austria went three-and-out on its next series and Woodley rumbled 47 yards for a score on the first play of the ensuing USA possession for a 63:7 lead with 47 seconds left in the third quarter.
"I thought Reggie Chevis was going to tip it. I was nervous, and then it came right to me," explained Harding.
Following another USA interception by Samuel Douglas, Birse threw a 19-yard touchdown pass to Adams for the final points of the game.
Brayden Scott earned Team USA MVP honors. He completed 10 of 17 passes for 129 yards and three touchdowns and rushed for one score.
Live Ticker Protokoll: 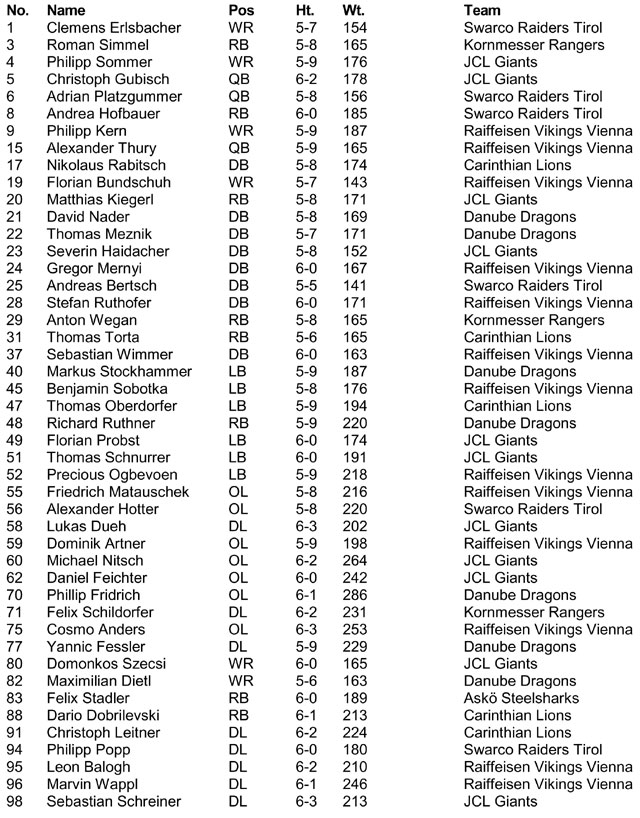