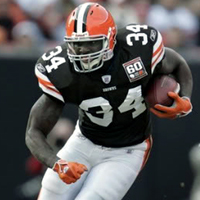 Although he hasn’t played in the NFL since the 2009 season with the New York Giants and he won’t play with the Vukovi, the addition of Droughns to the CEFL is one of the biggest transfers in European football history, as players of his caliber rarely go overseas.

"It was my first opportunity. Me and Goran (Nišavić, the Vukovi president) we talked about it for a while through a website. He asked what i was interested in and it seemed like a great situtation. Obviously a couple of American guys were already on the team, I already met them, coach Harper is great. He was familiar with who I was and it was a great opportunity for me to get into coaching", said Droughns upon arriving to Belgrade.

"I’m looking forward the most to help improve football. I want to bring as much football to Belgrade and improve the knowledge and help the people in Belgrade understand it’s a great sport we really love. That it’s not all about soccer or some other sports, that football is a really good sport."

Droughns hadn’t had an especially long and productive career in the NFL, but he did make a huge impact in the 2004 and 2005 seasons, when he rushed for 1240 and 1232 yards respectively, during which time he was known as one of the NFL’s toughest runners. And even if he had performed on a lower level, it still would be more then enough for European football, and the Vukovi’s coach John D. Harper agrees.

"Everybody coming from the NFL is basically like a professor. He’ll automatically help especially with the offense and help me with running backs. I’m willing to take anybody that’s willing to work. What’s for sure is that he’ll give some knowledge. That’s the minimal", said Harper.

Droughns will be present at the Vukovi’s 2010 CEFL season opener against the Ljubljana Silverhawks.