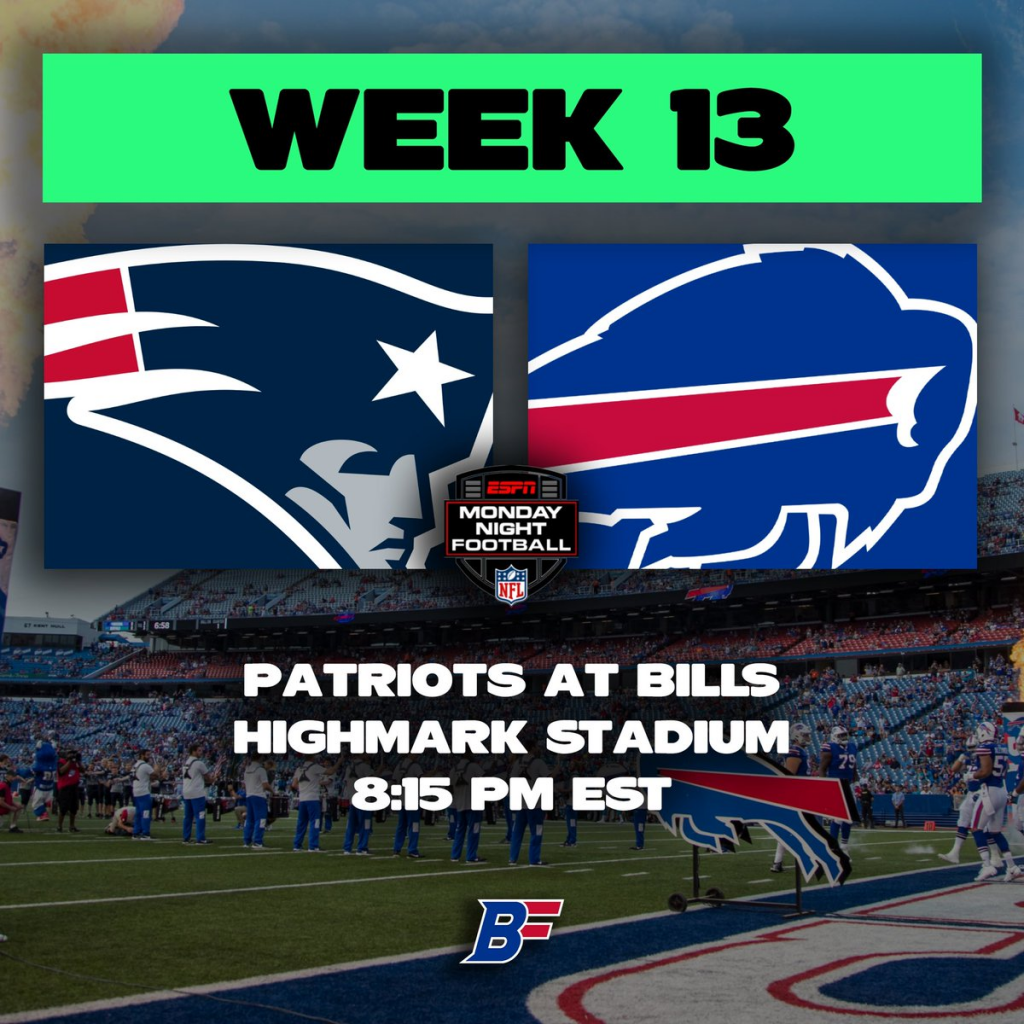 Overall, 25 teams have at least five wins through 12 weeks. The most at this point of a season in league history. In the AFC, 13 teams have five-or-more wins, the most in a conference through Week 12 since 2002, when 14 AFC teams entered Week 13 in that category.

Only six weekends remain to determine 14 playoff teams. And there’s peak volume on the highways in each conference.

Out in front, the races for the only first-round bye in both the AFC and NFC are separated by just half a game. BALTIMORE (8-3) and ARIZONA (9-2) enter play with hair-thin leads over NEW ENGLAND (8-4) and GREEN BAY (9-3), respectively.

In the middle of the bottleneck, in the race for the final playoff berth, each conference has nine teams within one game of the No. 7 seed.

Which teams will separate themselves from the traffic?

Don’t count out a team below .500 at this point in the season. In 15 of the past 17 seasons, at least one club with a sub-.500 record after 11 games has made the playoffs. Two teams did it last season.

At the front of the standings, three division leaders entering this week, ARIZONA, DALLAS and NEW ENGLAND, were not in the playoffs last season. At least two teams have won their divisions the season after missing the playoffs in 17 of the past 18 years.

On this week’s docket, seven of 14 games are between opponents from the same division. Looking ahead, of the remaining 92 games on the regular-season schedule, 49 will have division foes on opposite sidelines (including every game in the final week).

In Week 13 or later, Monday’s game marks just the fifth contest in the last 30 years involving a team ranking first in scoring defense against a team ranking first in fewest total yards allowed. In each of those games, a team advanced to at least its conference championship. Including two Super Bowl champions: Denver in 2015 and Washington in 1991.

The NFL’s last four games involving opponents leading the league in fewest points and yards allowed in Week 13 or later:

Both New England and Buffalo also rank among NFL leaders in takeaways (the clubs are tied for second with 25) and turnover margin (New England is second at plus-10 and Buffalo is tied for third at plus-nine).

Buffalo has not lost a game in its division since the 2019 season finale. The Bills’ nine-game divisional winning streak is the longest active stretch in the league, five games better than the next-longest streak, Arizona (four).

Last week, quarterback JOSH ALLEN completed 23 of 28 attempts (82.1 percent) for 260 yards and four touchdowns with two interceptions and a 115.2 rating in the Bills’ Thanksgiving night win. Allen now has six games of four-or-more touchdown passes since the beginning of the 2020 season. Only TOM BRADY and AARON RODGERS (each with nine) have more such games in that span.

New England cornerback J.C. JACKSON registered his seventh interception of the season and one forced fumble in the Patriots‘ win last week. Jackson has 24 career interceptions. He is tied with Pro Football Hall of Famer KENNY EASLEY (24 interceptions) and RICHARD SHERMAN (24) for the third-most by a player in his first four seasons since 1970. Only LESTER HAYES (25 interceptions) and EVERSON WALLS (25) have more. Jackson, who ranked second in the NFL with nine interceptions last season, is the first player since Sherman (2012-13) to record at least seven interceptions in consecutive seasons.

Also in the win, Patriots rookie MAC JONES completed 23 of 32 attempts (71.9 percent) for a career-best 310 yards, two touchdowns, no interceptions and a 123.2 rating.

STAY IN YOUR SEATS, ESPECIALLY IN BALTIMORE

Through 12 weeks this season, a game-winning score on the final play has decided 25 contests. The most at this point of a season in NFL annals.

The BALTIMORE RAVENS (8-3), who travel to meet the PITTSBURGH STEELERS (5-5-1) on Sunday at Heinz Field (4:25 PM ET, CBS), have excelled in each of those late-game categories.

The head coaches with the most meetings, including the postseason, in NFL history:

In last week’s win, Cincinnati running back JOE MIXON rushed for 165 yards and two touchdowns. Mixon has two touchdowns (rushing or receiving) in four consecutive games. He is the first player since STEVEN JACKSON in 2006 (Weeks 14-17) with at least two touchdowns in four straight games within a season.

Is it too early to say we saw vintage Justin Herbert last night? ⚡️@chargers | #BoltUp pic.twitter.com/9FWXbmMjpV

Los Angeles running back AUSTIN EKELER had 99 scrimmage yards (68 receiving, 31 rushing) and a touchdown reception last week. Ekeler, who has 5,057 career scrimmage yards, became the third undrafted player to reach 5,000 in his first five seasons in the common-draft era. He is joining ARIAN FOSTER and WILLIE PARKER.

Chargers linebacker JOEY BOSA leads the team with 7.5 sacks and joins his brother, San Francisco defensive lineman NICK BOSA (tied for fourth in the NFL with 11 sacks), to form one of the most dominant pass-rushing families in league history (their father, John, had seven career sacks). This season, the brothers have combined for 18.5 sacks entering Week 13.

The brother tandems with the most combined sacks in a season, since 1982:

The PHILADELPHIA EAGLES (5-7) have won all 11 games they’ve played against the NEW YORK JETS (3-8), their opponent at MetLife Stadium on Sunday (1:00 PM ET, CBS). Meanwhile, the KANSAS CITY CHIEFS (7-4) have defeated the DENVER BRONCOS (6-5) in 11 consecutive games, prior to their Sunday Night Football matchup at Arrowhead Stadium (8:20 PM ET, NBC).

The NFL’s longest active winning streaks against a single opponent, including the postseason:

When the MINNESOTA VIKINGS (5-6) visit the DETROIT LIONS (0-10-1) on Sunday (1:00 PM ET, CBS), the homework done by the Vikings’ personnel department will be on display.

Last week, wide receiver ADAM THIELEN had two touchdown receptions and running back KENE NWANGWU returned a kickoff 99 yards for a touchdown. Minnesota signed Thielen out of Minnesota State as a non-drafted free agent in 2014. They selected Nwangwu on Day 3 of the 2021 NFL Draft in the fourth round out of Iowa State.

Thielen, who has 50 career touchdowns (49 receiving, one rushing), is the fourth undrafted wide receiver with at least 50 career touchdowns in the common-draft era. He is joining ROD SMITH (69), GARY CLARK (65) and WES WELKER (50). Thielen also is tied for the league lead with 10 touchdown receptions this season and. Along with his 14 touchdown catches in 2020, he is the fourth undrafted player to record at least 10 touchdown receptions in multiple seasons. He is joining ANTONIO GATES (four), STEPHONE PAIGE (two) and ROD SMITH (two).

Nwangwu, who also returned a kickoff 98 yards for a touchdown in Week 9. He is the first rookie with two kickoff-return touchdowns in a season since CORDARRELLE PATTERSON in 2013.

Rookies for the NEW YORK GIANTS (4-7) and MIAMI DOLPHINS (5-7) are leading their teams in both receiving and sacks. The two clubs meet on Sunday at Hard Rock Stadium (1:00 PM ET, FOX).

In last week’s win, Waddle had nine receptions for a career-high 137 yards and one touchdown. His 77 receptions this season are the second most by a player in his first 12 career games in NFL history. Only ODELL BECKHAM JR. (91) had more.

Also in Week 12, Miami quarterback TUA TAGOVAILOA completed 27 of 31 attempts (87.1 percent) for 230 yards and one touchdown with a 108.3 rating, while cornerback XAVIEN HOWARD recorded his third interception of the season.

Howard, appearing in his 67th game, registered his 25th career interception and surpassed MARCUS PETERS (68 games). He is the fastest player to reach 25 interceptions since 1990.

The TAMPA BAY BUCCANEERS (8-3), bidding to become the first repeat Super Bowl champion since 2004, continue their journey on Sunday against the ATLANTA FALCONS (5-6) at Mercedes-Benz Stadium (1:00 PM ET, FOX).

In last week’s win, Tampa Bay running back LEONARD FOURNETTE totaled a career-best four touchdowns (three rushing, one receiving). After Indianapolis running back JONATHAN TAYLOR had five touchdowns and Los Angeles Chargers running back AUSTIN EKELER had four in Week 11. Fournette’s performance gave the league consecutive weeks in which a running back reached the end zone four-or-more times. That hasn’t happened since Weeks 10-11 of the 2014 season, when MARSHAWN LYNCH and JONAS GRAY each had four touchdowns, respectively.

Buccaneers tight end ROB GRONKOWSKI had seven receptions for 123 yards last week. It was his 30th career game with at least 100 receiving yards. Gronkowski joined Pro Football Hall of Famer TONY GONZALEZ (31) as the only tight ends with at least 30 games with 100-or-more receiving yards all-time.

BIG PLAY TO OPEN THIS ONE.@DeSeanJackson10 gets the corner and a TD! #RaiderNation

Washington has won three straight games this season to climb into the NFC’s No. 7 playoff seed.

In last week’s overtime win at Dallas, Jackson caught three passes for 102 yards, including a 56-yard touchdown. It was the 34th time Jackson has scored on a touchdown of at least 50 yards, including returns. Only Pro Football Hall of Famer JERRY RICE (36) has more touchdowns of 50-or-more yards in NFL history. Jackson spent eight seasons with the Eagles and three with Washington.