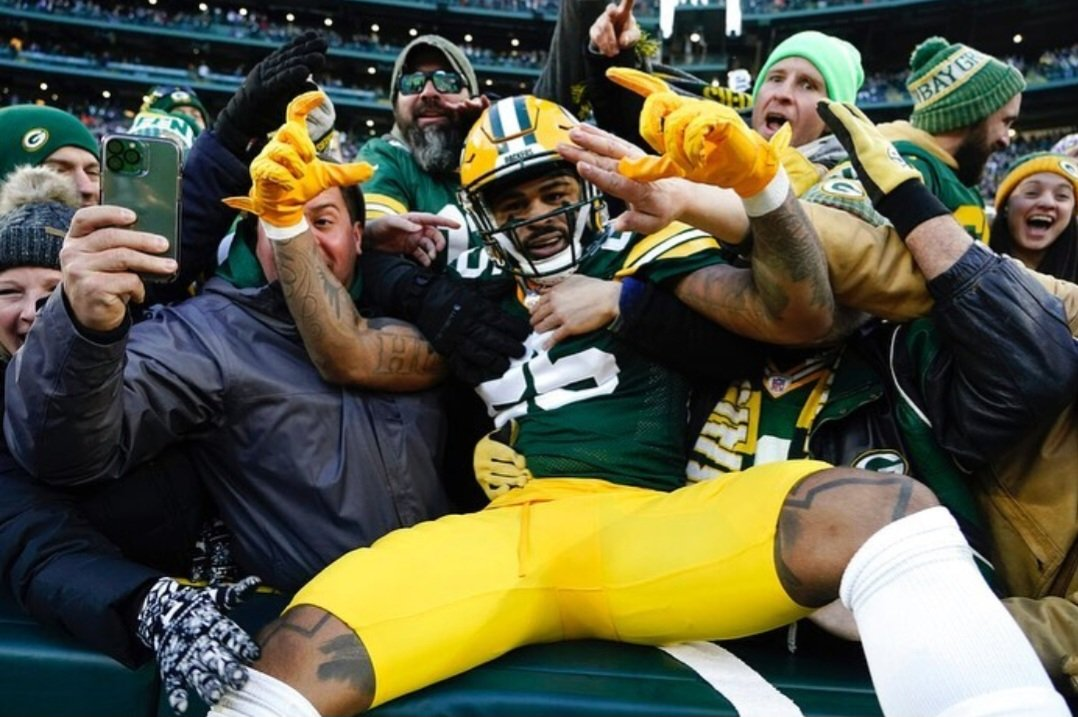 The TAMPA BAY BUCCANEERS defeated Carolina, 30-24. They clinched the NFC South division title in consecutive seasons for the first time in franchise history.

The NEW YORK GIANTS defeated Indianapolis 38-10, and clinched a playoff berth for the first time since 2016.

Four teams – BALTIMORE, the LOS ANGELES CHARGERS, MINNESOTA and the NEW YORK GIANTS – have clinched playoff berths after missing the postseason last year. Since 1990 – a streak of 33 consecutive seasons – at least four teams have qualified for the playoffs in every season that were not in the postseason the year before.

With two games yet to be completed in Week 17, there have been 113 games decided by a touchdown (six points) or less and 191 games within one score (eight points) in the fourth quarter this season. Both the most such games in a single season in NFL history.

ATLANTA defeated Arizona with a field goal as time expired in regulation and San Francisco defeated Las Vegas in overtime in Week 17. There have been 61 games this season decided by a game-winning score in the final two minutes of regulation or in overtime. The most such games in a single season in NFL history.

Kansas City quarterback PATRICK MAHOMES passed for 328 yards and three touchdowns, including two to running back JERICK MCKINNON. Tight end TRAVIS KELCE had seven receptions for 43 yards in the Chiefs‘ 27-24 win over Denver.

He can even complete passes to himself. #WPMOYChallenge + @PatrickMahomes

Mahomes joins DREW BREES (2011-12) as the only players ever with two career seasons of 5,000 passing yards and 40 touchdown passes.

Kelce recorded his 96th career game with at least five receptions, tied with ANTONIO GATES (96 games) for the third-most such games by a tight end in NFL history. Only Pro Football Hall of Famer TONY GONZALEZ (139 games) and JASON WITTEN (130) have more.

McKinnon is the first running back since 1970 to record a touchdown reception in five consecutive games.

Brady has 11 career games with at least 400 passing yards and three touchdown passes, tied with Pro Football Hall of Famers PEYTON MANNING (11 games) and DAN MARINO (11) for the second-most such games in NFL history. Only DREW BREES (12 games) has more.

Brady has 131 career games with at least 300 passing yards, including the postseason, tied with DREW BREES (131) for the most such games including the playoffs in NFL history.

3rd win this season down double digits in the 4th quarter

Evans has five career games with at least 180 receiving yards and two touchdown receptions, tied with TYREEK HILL (five games) for the most such games in NFL history.

The fact Justin Herbert even threw this ball is insane. pic.twitter.com/lNLb9svV8E

Congrats to Austin Ekeler Fantasy owners on your championship
pic.twitter.com/gu46XHQB8r

Herbert has 44 career games with a touchdown pass. Tied with Pro Football Hall of Famer PEYTON MANNING (44 games) for the most such games with at least one touchdown pass by a player in his first three seasons in NFL history.

Ekeler has 1,567 scrimmage yards with 18 scrimmage touchdowns (13 rushing, five receiving) this season and joined PRIEST HOLMES (2002-03) as the only undrafted players with at least 1,500 scrimmage yards and 15 touchdowns in consecutive seasons in the common-draft era.

In a tie game with 4 minutes left in the 4th, Brock Purdy throws a dart to Brandon Aiyuk for the 23-yard gain to extend the drive. Jordan Mason would later score to give the Niners the lead

Running back CHRISTIAN MCCAFFREY had six catches, 193 scrimmage yards (121 rushing, 72 receiving) and one rushing touchdown in the 49ers‘ 37-34 overtime win at Las Vegas.

Purdy is the fifth rookie quarterback ever to win each of his first four career starts. He is joining BEN ROETHLISBERGER (won first 13 starts in 2004), MIKE KRUCZEK (first six in 1968), VIRGIL CARTER (first four in 1968) and PHIL SIMMS (first four in 1979).

Purdy became the seventh rookie in the Super Bowl era with at least two touchdown passes in five consecutive games and the first since JUSTIN HERBERT (2020).

McCaffrey has 439 receptions and surpassed ROGER CRAIG (434) for the most receptions by a running back in his first six seasons in NFL history.

Hutchinson, who has 7.5 sacks this season, and Houston (eight sacks) are the first pair of rookie teammates each with at least seven sacks since 1982, when the individual sack became an official statistic.

Hutchinson is the first rookie since 1982, when the individual sack became an official statistic, with at least seven sacks (7.5) and three interceptions (three).

Houston is the first player with eight sacks in his first six career games since 1982, when the individual sack became an official statistic.

With Houston and Paschal, it marked the fourth game in which rookie teammates each recorded multiple sacks in the same game since 1982, when the individual sack became an official statistic. The three other occurrences were October 4, 1987 (Chicago’s JIM ALTHOFF and SEAN MCINERNEY), November 11, 2001 (Buffalo’s KENDRICK OFFICE, TYRONE ROBERTSON and AARON SCHOBEL) and December 20, 2009 (Green Bay’s BRAD JONES and CLAY MATTHEWS).

Additional notes from Sunday include:

New Orleans defensive end CAMERON JORDAN had three sacks and a forced fumble in the Saints‘ 20-10 win over Philadelphia.

Jordan has 8.5 sacks this season and is the sixth player since 1982 to record at least seven sacks in 11 consecutive seasons.  He is joining Pro Football Hall of Famers REGGIE WHITE (14 consecutive seasons), CHRIS DOLEMAN (13), JOHN RANDLE (12) and DERRICK THOMAS (11), as well as ROBERT MATHIS (11).

Green Bay cornerback KEISEAN NIXON had a 105-yard kickoff-return for a touchdown.

Safety DARNELL SAVAGE had a 75-yard interception-return for a touchdown in the Packers‘ 41-17 win over Minnesota.

Minnesota safety JOSH METELLUS recorded a blocked punt on Sunday and became the first player since 1995 (ANTHONY MARSHALL) to block a punt in consecutive games.

PHILADELPHIA recorded seven sacks on Sunday and lead the NFL with 68 sacks this season.

NEW ENGLAND defeated Miami, 23-21, as defensive back KYLE DUGGER registered a 39-yard interception-return for a touchdown.

The Patriots joined the 2002 TAMPA BAY BUCCANEERS (Weeks 2-5) as the only teams since 2000 with a defensive touchdown in four consecutive games within a single season.

LOVE this play. @ChicagoBears TE Cole Kmet motions to under center and tosses it to QB Justin Fields for a 31-yard sweep. pic.twitter.com/ViwbcyTUUe

Fields has 1,143 rushing yards this season. He surpassed MICHAEL VICK (1,039 rushing yards in 2006) for the second-most rushing yards by a quarterback in a single season in NFL history. Only LAMAR JACKSON (1,206 in 2019) has more.

Fields has four career games with at least 100 rushing yards, tied with RUSSELL WILSON (four games) for the third-most such games by a quarterback in the Super Bowl era. Only LAMAR JACKSON (12 games) and MICHAEL VICK (10) have more.

Who says Russell Wilson has lost his mobility?

Wilson has 4,948 rushing yards and surpassed RANDALL CUNNINGHAM (4,928) for the third-most rushing yards by a quarterback in NFL history. Only MICHAEL VICK (6,109 rushing yards) and CAM NEWTON (5,628) have more.

“Would you take a bullet for the Las Vegas Raiders?”

Stidham joined MIKE WHITE (Week 8, 2021) as the only quarterbacks since 1950 with at least 350 passing yards and three touchdown passes in their first career start.

Adams has five games with at least 100 receiving yards and two touchdown receptions this season. He is the fifth player in NFL history with five such games within a single season. He is joining Pro Football Hall of Famers RANDY MOSS (seven games in 2007), LANCE ALWORTH (five in 1966), DON HUTSON (five in 1942) and TERRELL OWENS (five in 2001).