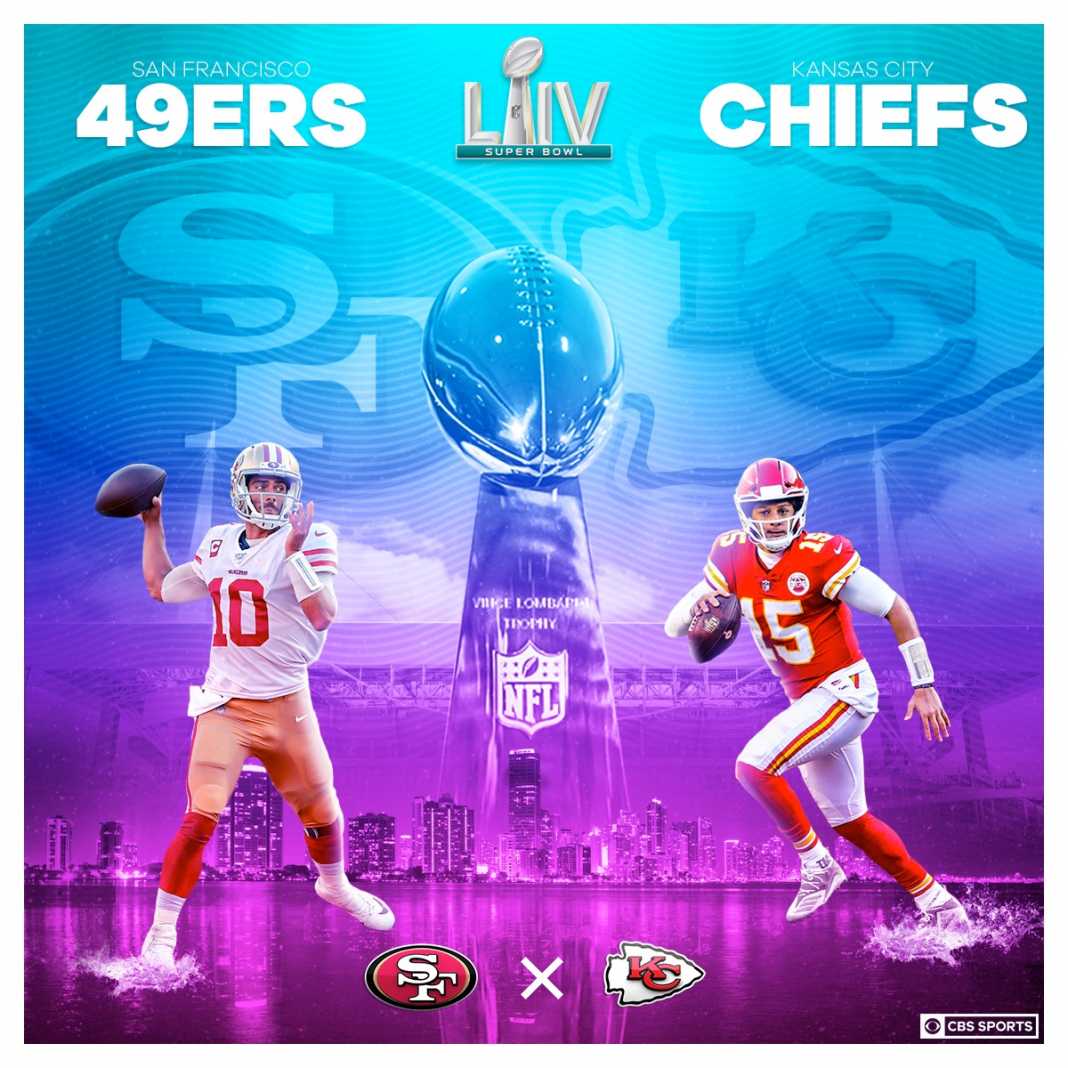 Can the 49ers maintain their historic pace on the ground?
Will @PatrickMahomes stay near perfect in the #NFLPlayoffs?@PFF previews @Chiefs vs. @49ers in #SBLIV! pic.twitter.com/wnIWO0EsrT

With a San Francisco victory…

With a Kansas City win…

San Francisco earned a trip to Miami with a 37-20 win over Green Bay in the NFC Championship.

… rushed for 220 yards, the second-most ever in an NFL postseason game. Trailing only Pro Football Hall of Famer ERIC DICKERSON’s 248 rushing yards for the Los Angeles Rams on January 4, 1986. Mostert also became the third player in postseason history to rush for at least four touchdowns in a single game. He’ll be joining RICKY WATTERS (five) and LEGARRETTE BLOUNT (four).

Quarterback JIMMY GAROPPOLO has a 23-5 (.821) career record as a starter, including the postseason. He makes his first-career Super Bowl start.

… has 2,945 career receiving yards. He surpassed Pro Football Hall of Famer MIKE DITKA (2,774) for the most receiving yards by a tight end in his first three seasons in league annals. Wide receiver EMMANUEL SANDERS joined Pro Football Hall of Famers WALTER PAYTON and LADAINIAN TOMLINSON, along with ODELL BECKHAM JR., as the only non-quarterbacks to record both a passing and receiving touchdown in multiple games since 1970. Wide receiver DEEBO SAMUEL had three games with at least 100 receiving yards in 2019. The most by a rookie in franchise history.

… has recorded three sacks in the 49ers first two postseason games. He can become the third rookie since 1982 when the individual sack became an official statistic, to record at least four sacks in a single postseason. He’ll be joining GREG TOWNSEND (4.5 sacks in 1983) and GARIN VERIS (four in 1985). Defensive lineman ARIK ARMSTEAD has recorded a sack in each of San Francisco’s two postseason games this year. Cornerback RICHARD SHERMAN has registered an interception in both the Divisional and Championship rounds. Defensive lineman DEE FORD spent five seasons (2014-18) with Kansas City and recorded a career-high 13 sacks and seven forced fumbles with the Chiefs in 2018.

He's back in the @SuperBowl for the third time in his career. #SBLIV

Kansas City won the AFC Championship with a 35-24 win over the Tennessee Titans.

"50 years of waiting… And the @Chiefs are going to the @SuperBowl!"

The touchdowns, the tears, the triumph. Relive the best of the AFC Championship. #SBLIV (via @NFLFilms) pic.twitter.com/kx18df61WV

… led the Chiefs back from a 10-0 deficit, giving Kansas City its first lead on a highlight-reel, 27-yard run just prior to halftime. He also threw for 294 yards and three touchdowns. Wide receiver SAMMY WATKINS caught seven passes for 114 yards, including a 60-yard touchdown. Earlier, the Chiefs captured the AFC West division title (12-4) for a fourth consecutive year, the longest streak in franchise history.

The Chiefs have scored at least 30 points in each of Mahomes’ first four career postseason starts. They are tied for the second-longest postseason streak in the Super Bowl era. At 24 years and 138 days old on Sunday, he is the fifth-youngest quarterback to start a Super Bowl. With a victory, Mahomes would become the youngest player to win both an NFL MVP award and a Super Bowl. He’ll be surpassing Hall of Famer EMMITT SMITH (24 years, 233 days old on the last day of his MVP 1993 season). Mahomes recorded 75 touchdown passes and 9,238 passing yards in his first 30 career games. Both the most by any player through his first 30 career games in NFL history.

… has four touchdowns this postseason, including three in the Chiefs Divisional Round victory. Williams has nine total touchdowns in his first five postseason games. Tied with Pro Football Hall of Famer TERRELL DAVIS (nine) and LARRY FITZGERALD (nine) for the most by a player in his first five postseason games in NFL history. Wide receiver TYREEK HILL has 21 career touchdowns of at least 40 yards. Tied with Pro Football Hall of Famer JERRY RICE (21) for the third-most such touchdowns in a player’s first four seasons in NFL history. Tight end TRAVIS KELCE became the first tight end in NFL history with four consecutive 1,000-yard receiving seasons. Since 2017, Hill and Kelce have combined for 7,795 receiving yards. The most by a wide receiver-tight end teammate duo over a three-season span since 1970.