With three games remaining in Week 1, there have been a total of 13 offensive touchdowns of 40-or-more yards, the second-most on Kickoff Weekend in NFL history. Only Kickoff Weekend of the 1991 season (14) had more such offensive scores of at least 40 yards.

It marks the first week in which three-or-more rookies have each recorded at least 100 receiving yards in their debuts in NFL history.

The BALTIMORE RAVENS defeated Miami 59-10 on Kickoff Weekend. Baltimore scored 42 points in the first half, the most by any team in the first half of a season-opening game in NFL history. The Ravens, who scored 47 points on Kickoff Weekend in 2018, are the fifth team in league annals and first since the 1967-68 OAKLAND RAIDERS to score at least 40 points in consecutive season-opening games.

Baltimore quarterback LAMAR JACKSON completed 17 of 20 attempts for 324 yards with five touchdowns and zero interceptions for a 158.3 passer rating in the victory. Jackson is the seventh quarterback in NFL history and first since BEN ROETHLISBERGER (November 11, 2018) with at least 300 passing yards, five touchdowns and a 158.3 passer rating, the highest attainable mark, in a single game in NFL history.

Jaguars rookie quarterback GARDNER MINSHEW completed 88 percent of his pass attempts (22 of 25), the highest completion percentage (minimum 15 attempts) by a quarterback in his NFL debut in league annals. Minshew completed his first 13 pass attempts, the longest streak to start a career among players who made their NFL debut over the past 40 seasons.

Dallas quarterback DAK PRESCOTT completed 25 of 32 attempts for 405 yards with four touchdowns and zero interceptions for a 158.3 rating in the Cowboys‘ 35-17 victory against the New York Giants.Prescott is the fourth quarterback to register a 158.3 passer rating, the highest attainable mark, on 30-or-more pass attempts in NFL history, joining JARED GOFF (33 attempts on September 27, 2018), KEN O’BRIEN (32 attempts on November 2, 1986) and Pro Football Hall of Famer KURT WARNER (30 attempts on October 1, 2000).

The LOS ANGELES CHARGERS defeated the Indianapolis Colts 30-24 in overtime while the ARIZONA CARDINALS and DETROIT LIONS played to a 27-27 tie at State Farm Stadium on Kickoff Weekend. At least one game on Kickoff Weekend has gone to overtime in five of the past six seasons.Sunday’s contest between the Cardinals and Lions marked the second consecutive season in which a game ended in a tie in Week 1 and the third tie overall on Kickoff Weekend. The Pittsburgh Steelers and Cleveland Browns tied on September 9, 2018, while the Miami Dolphins and Denver Broncos played to a 10-10 tie on September 19, 1971.

Arizona wide receiver LARRY FITZGERALD recorded eight catches for 113 yards and one touchdown, the 117th touchdown catch of his NFL career. He surpassed ANTONIO GATES (116 touchdown receptions) for the sixth-most in NFL history. 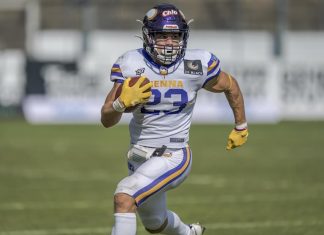