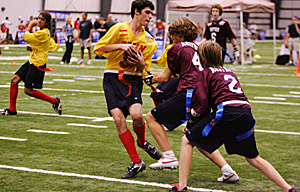 Three Teams Remain Unbeaten After First Round Action
The United States, Mexico and Austria remain unbeaten after the first day of action at the NFL Flag Football World Championship at the New Orleans Saints practice facility in Metairie.

Mexico beat Japan, China and Canada to lead Group A at 3-0, while the United States saw off a tough challenge from Thailand and swept past England to sit at 2-0 on top of Group B, closely followed by Austria, who also posted a 2-0 mark after defeating Spain and England.

The FFWC kicks resumes in Metairie on Friday, August 9 from 8am to 12pm. The top two teams emerging from group play and two semi finals will contest the championship game at 3.30pm on Friday before the Saints take on the Buffalo Bills in the Louisiana Super Dome.

Austria – Wenzgasse Vikings from Vienna
Initially disappointed to be drawn against two familiar European opponents, the Austrians left the Saints facility in good spirits and arguably emerged as the surprise package in Group B, trailing USA in the standings only by the points conceded tie-breaker.

The double receiving threat of six-footers Jakob Hackel and Sebastian Wolf helped defeat Spain 38-31 and then hold off the challenge of England 35-32. The English no huddle offense threatened and produced a touchdown early in the second half, but Austria countered and when protecting a fragile two-point lead as the clock ran down, Roman Toth produced a game-winning interception.

Coach Jürgen Gattenbauer said: ‚We are basically the European champions again. We knew Spain well having beaten them only a few weeks ago, but the game against England was tough and came down to two points in the end. We matched them by switching to a no huddle defense and calling in our plays to counter what they were doing.

It is going to be really tough playing Thailand and the USA, but we just have to beat one of them to reach the semi finals. We intend to have four more games on Friday.”