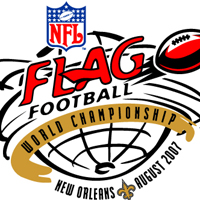 Canada has finished as runner up in three of the previous seven tournaments, but convincingly won the 2007 title before the New Orleans Saints took on the Buffalo Bills in NFL preseason action.

‚We are proud to win for Canada and for our families who have been fantastic the way they have supported us here,” said quarterback and team MVP Alex Hill. ‚It was fantastic to play in the Superdome and we believed all along, even when we weren’t playing well or when things were going against us that we were going to win.”

The Canadians‘ composure throughout the FFWC proved crucial as they overcame a loss to Mexico in the group stages, sealed a dramatic victory over USA when trailing with only seven seconds remaining in the semi final and came from behind in the championship game.

Mexico took an early lead in the Superdome on only the game’s second play when Kevin Palomino reeled in a touchdown pass and Alan Mendoza scored the extra point. Canada were held in check, but on their next drive Chris Johnson caught a touchdown pass from Hill and Jaclyn Carbone tied the game.

As guests of the New Orleans Saints, the ten teams taking part in the FFWC watched the preseason game that followed from field level sideline seats, provided a guard of honor when the Saints entered the field and gave a halftime NFL Flag football display. Canada received the championship trophy from Saints owner/executive vice president Rita Benson LeBlanc and an enthusiastic welcome from the fans in the Superdome.

Semi Finals:
Canada and Mexico emerged from two thrilling semi finals that both went down to the wire. Canada and the USA traded scores until halftime when the game was tied at 26-26. After the interval the stalemate resumed and heading towards the two-minute warning the score remained deadlocked at 39-39. The game’s turning point came when defensive rusher Alexandra Petermann sacked USA quarterback Gavin Block, who was then intercepted by Alex Hill.

With 14 seconds on the clock, Lucas Mancini reeled in a catch at midfield then with seven seconds remaining dramatically caught the decisive touchdown for a 45-39 lead. The USA had one last shot at forcing overtime, but Petermann produced another sack as time expired to seal an emotional victory.

Equally as close was the clash between Mexico and Thailand. The defending champion Chaopraya Wittayakom Middle School from Thailand held a 18-13 halftime lead that was chipped away until only a point separated the teams at 26-25 in Mexico’s favor. In two nervous moments the teams traded safeties before Daniel Mier underlined his MVP status with a touchdown catch inside the two-minute warning.

Trailing 34-27, Thailand scored six points on a Preecha Dathong grab in the end zone, but the point after attempt was unsuccessful and Mexico held on to triumph 34-33.

Austria – Wenzgasse Vikings from Vienna
Opening the second day of action at 2-0, Austria expected a tough task ahead and suffered a 44-13 loss to Thailand before going down 28-0 to the United States.

Canada – Steeltown Steelers from Hamilton, ON
Needing a victory over China to reach the semi finals, Canada delivered with a hard-fought 47-32 victory. Chris Johnson, Lucas Mancini, Anthony Pizzuti and Alex Hill were among the touchdowns, the most decisive coming when Pizzuti opened an unassailable 41-26 lead. Canada held on for victory despite two late China scores.

China – Shoushi Shiyan Middle School from Beijing
Entering the second day of action with a semi final berth in its own hands, China missed out in a 47-32 loss to Canada in the day’s opening game. Xinyi Xie scored two touchdowns in the loss, while there were also trips to the end zone for Yu Chen, Shengbo Zhu and Jishen Pang. Taking on Japan for third place in Group A, China suffered a 21-13 defeat to close the tournament at 2-2.

England – Woodham Warriors from County Durham
England quarterback Chris Barber hit Kiaran Dixon for a touchdown and Jake Johnson for a score as time expired after the opening 20 minutes to earn a 13-6 halftime lead over Spain. Johnson increased the lead to 14 points and when Spain threatened a comeback, scored his third touchdown of the day for a 27-12 victory that was secured when Barber came up with an interception in the end zone.

The Warriors stayed in contention against Thailand in an epic final game of the group stages while chasing an outside chance of a semi final place. Dixon was the main offensive threat as having trailed 38-18 at halftime, England recovered to cut the deficit to nine points. Thailand’s firepower eventually overcame the Warriors in a 57-36 shootout.

Japan – Adachi Gauken Wild Bears from Tokyo
Already mathematically eliminated after a 1-2 start, Japan played for pride on Friday and improved to claim fifth place overall from the tough Group A. China was the day’s only opponent and with Yuki Hirose the main offensive threat, the Wild Bears recorded a 21-13 victory.

Korea – Sungseo Middle School from Daegu
Korea faced a tough task on Friday in facing group leader Mexico and was unable to improve on a 0-3 start, falling to a 38-13 defeat.

Mexico – Los Diablitos from Mexico City
Already assured of a place in the semi finals, Mexico saw off the challenge of Korea with Daniel Mier dominant on both sides of the ball in a 38-13 victory.

Spain – Pere Vives Viches from Igualada
Spain lost 27-12 to Euroepan rival England in the morning’s first game, though they matched their opponent’s first touchdown with some trickery as quarterback Eduard Santacana made the switch to receiver and caught an instant pass from Eric Moncunill. An interception led to England taking a commanding 20-6 lead and when Spain attempted a late comeback another pick, this time in the end zone, ended their resistance.

Final opponent USA was in no mood to take its foot off the gas on the way to a 4-0 finish and ran out 41-13 winners over the Igualada youngsters. Roger Calzada and Moncunill scored Spain’s points.

Thailand – Chaopraya Wittayakom Middle School from Bangkok
Last year’s champion eliminated Austria from the race for the knockout stages with a 44-13 victory and then ended England’s hopes in a 57-36 win. Chalongchai Phongsuphan and Jiraphong Kulprajuab did most of the scoring for the Thais.

USA – Michael-Ann Russell JCC from North Miami Beach
The US ended Austria’s qualification hopes with a decisive 28-0 victory as Jonathan Salk score a hat trick of touchdowns before Bryan Rub made a trip to the end zone. Spain provided more resistance, but the US still cruised to a 41-13 win as Rub and Salk again did most of the damage and Ari Halle came up with a timely interception that ended any slim hopes of a Spanish comeback. The team’s semi final loss to Canada marked the first time in three appearances at the FFWC that the MAR JCC has not appeared in the championship game (winners 2004, runners-up 2005).