This year they are going to play in the premier league – European Football League. The team, coached by an American John Srholec, was also invited to play in the AFL.

‚We want to succeed in all competitions, the time of building the team is already behind us” said Srholec during the press conference in Prague. The Panthers are also happy with the new general sponsor.

‚The team schedule is extremely full. If we succeed in all three leagues and get to the final, we would play 21 games and the season would end on the 10. of July” said the team manager David Krejbich. It means 14 games in the basic part of the season, 5 of which at the Athletic stadium in Prague-Eden, 4 on other grounds in the ČR, 3 in Austria and one in Slovakia and Sweden. In all three leagues the play off part is also played.

The first play is the very next Saturday, at the Eden athletics stadium when the Panthers will fight against Turek Graz Giants from Austria. One week later the Panthers will enter the EFL cup against the Berlin Adlers, the only team which have beaten them lately. ‚The Austrian league is one of the most superior in Europe and Berlin is very hard team to play,” said Krejbich. Both the games start at 2 pm. "Twenty billboards are inviting Panthers fans to come” said the spokesman Marek Miláček.

The larger portion of games will also bring a bigger load for the players and therefore the Panthers have enlarged their team. The pillar should become the owner of a Jamaican passport Clinton Graham. Graham was awarded the most useful player in Austrian league twice. The offense will be supported by Robin Jonsson from Sweden and Antti Martikka from Finland. Also, the most talented Czech player, Miloš Hildebrand returned from his hosting in Finland to join his team. ‚We can count on the extraordinary ……Jakob Shrum ‚, said the the coach Srholec. Shrum was the biggest star of the last year after all. The coaches son will also come to help the team, he arrives on Thursday. It is a paradox that in the College League the son is the mine coach and the senior helps, whereas here the situation is opposite. There are seven professional players on the list of the team, the budget has increased by five or even seven times from the last year and could be up to three million crowns.

An important part plays the new general partner, the Collect Point company. ‚The Collect Point company decided to support the team because our work and their play have a lot in common. We work hard, think about the strategy, we definitely ‚play” a fair play game in accordance to all the rules and law” said the commission agent of the company Collect Point René Hána. The home company sponsors soccer and rugby in England. 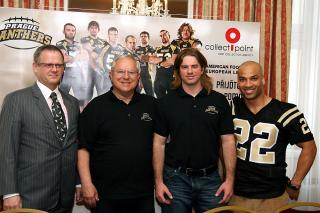