Österreichs Football Portal
Start College Football No. 2 Oregon (6-0) vs. Washington State (4-3)
Teilen
Facebook
Twitter
WhatsApp
Email
Linkedin
Pinterest
Last weekend the Oregon Ducks defeated the then #16 Washington Huskies 45-24. The Huskies gave a good effort, but there is no stopping the Oregon Bullet-Train. The Oregon quarterback Marcus Mari-O-ta is now the leading candidate for the Heisman Trophy. So far this season Mariota has thrown for 17 TDs and run for eight more, all while throwing NO interceptions. Last week he led the Ducks to victory even though he was without his fastest weapon DeAnthony Thomas, who missed the game with a sprained ankle. Here is the highlight video of the game.
This weekend the big news is that the Oregon Ducks 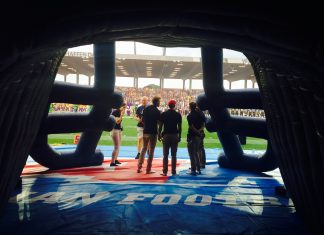