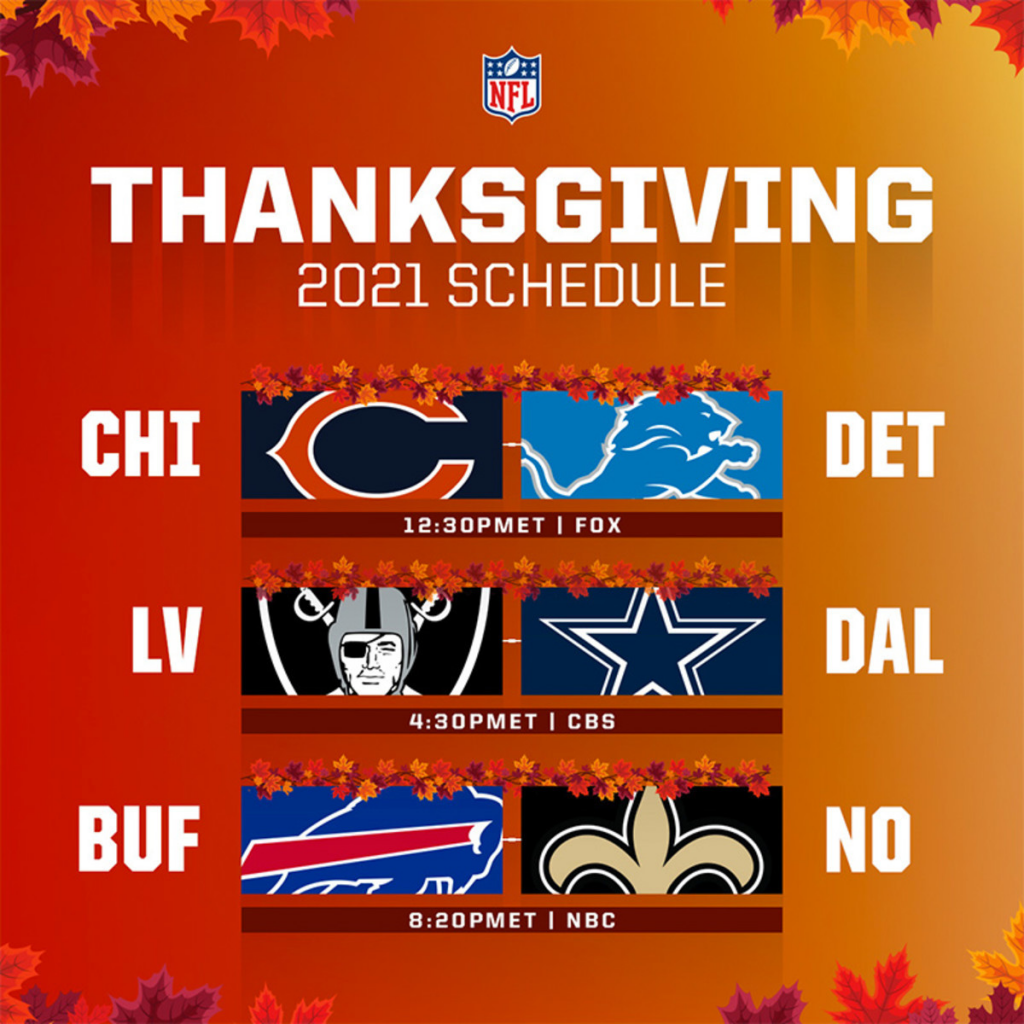 For generations of Americans, the tradition of Thanksgiving Day and NFL football are historically intertwined.

On Thanksgiving in 1925, a crowd of 36,000 – then the largest in professional football history – watched the CHICAGO BEARS play the CHICAGO CARDINALS to a scoreless tie at Wrigley Field. In 1934, the DETROIT LIONS and the defending world champion Bears squared off on Thanksgiving in the first NFL game nationally broadcast.

Since 2006, the NFL has scheduled three Thanksgiving Day games each year. This year’s triple-header features three teams currently in playoff position and four teams with a .500-or-better winning percentage.

The Thanksgiving Day records of the teams playing this Thursday:

Thursday’s matchup marks the 19th Thanksgiving Day meeting between the Bears and Lions, dating back to November 29, 1934. Pro Football Hall of Famer BRONKO NAGURSKI threw a two-yard touchdown pass to BILL HEWITT for Chicago to secure a 19-16 victory over Detroit in the first holiday meeting between the two teams. In their last Thanksgiving Day matchup, running back DAVID MONTGOMERY recorded the go-ahead touchdown with 2:17 remaining as Chicago overcame a 10-point deficit to defeat Detroit, 24-20, on November 28, 2019.

Thursday marks the second meeting of the season between the two NFC North rivals. In Week 4, the Bears earned a 24-14 victory as Montgomery rushed for 106 yards and two touchdowns in the win. Chicago has won six of the past seven meetings between the two clubs, including three consecutive road victories.

Last year on Thanksgiving, Dalton passed for 215 yards and one touchdown with Dallas. Quarterback JUSTIN FIELDS, who passed for 209 yards with an 82.7 passer rating in Week 4 against Detroit, can become the fifth rookie quarterback to start on Thanksgiving in the past 10 seasons.

Chicago has 31 sacks this season, tied with Minnesota for the most in the NFL. Linebacker ROBERT QUINN had a career-high 3.5 sacks in Week 11 and leads the team with 10 sacks, his fifth-career 10-sack season. Linebacker ROQUAN SMITH had a career-high 17 tackles last week and has 110 tackles this season, his fourth-consecutive 100-tackle season since entering the NFL in 2018. In the 2019 meeting on Thanksgiving, he recorded 16 tackles and two sacks.

In Week 11, Detroit running back D’ANDRE SWIFT rushed for a career-high 136 rushing yards with his fourth rushing touchdown of the season.

Defensively, Detroit is one of three NFC teams (DALLAS and SAN FRANCISCO) to allow fewer than 20 points in each of their Week 10 and Week 11 games. Cornerback AMANI ORUWARIYE recorded his career-high fourth interception of the season last week. Linebacker CHARLES HARRIS registered a sack and forced fumble in Week 4 against Chicago and aims for his third in a row against the Bears with a sack.

The Raiders and Cowboys meet for the 13th time, with the all-time series tied, 6-6. Thursday marks the third meeting between the two franchises on Thanksgiving. On November 28, 2013, Dallas running back DEMARCO MURRAY totaled 102 scrimmage yards (63 rushing, 39 receiving) and three rushing touchdowns in a 31-24 victory. On November 26, 2009, Cowboys quarterback TONY ROMO passed for 309 yards with two touchdowns and no interceptions for a 121.2 rating in the team’s 24-7 win over the Raiders.

Linebacker DENZEL PERRYMAN leads the AFC with a career-high 114 tackles and has nine games with at least 10 tackles this season, most in the league.

Defensive end YANNICK NGAKOUE registered his seventh sack of the season last week and is the only player in the NFL with at least seven sacks in each of the past six seasons.

Including the holiday, he has a passer rating of 90-or-higher in seven of his nine career starts on Thursday. In five home starts this season, Prescott has 15 touchdowns with two interceptions for a 118.1 rating. He aims for his sixth in a row at home with at least two touchdown passes. The Cowboys have scored at least 35 points in nine of Prescott’s last 10 home starts.

Rookie linebacker MICAH PARSONS had two sacks and a forced fumble last week and leads all rookies with eight sacks.

He aims for his third in a row with a forced fumble and fourth in a row with at least one sack. Cornerback TREVON DIGGS leads the NFL with eight interceptions this season and ranks second with 13 passes defensed.

Buffalo is appearing on Thanksgiving for the second time in the past three seasons. In 2019, quarterback JOSH ALLEN had two touchdowns (one passing, one rushing) with a 120.7 rating in a Bills victory over the Cowboys.

New Orleans is playing in its fourth Thanksgiving game since 2010 and third in the past four seasons. The Saints (3-0 on Thanksgiving) are one of four active franchises that are undefeated on the holiday. Along with Baltimore (2-0), Houston (2-0) and Carolina (1-0).

Entering Week 12, he has a sack in four of his past five contests. Defensive end MARCUS DAVENPORT had 1.5 sacks last week and aims for his fourth in a row with a sack. He recorded two sacks and two forced fumbles on Thanksgiving in 2019 against Atlanta. Cornerback MARSHON LATTIMORE is one of three defensive backs (JAMES BRADBERRY and MARLON HUMPHREY) with at least 10 passes defensed in each of the past five seasons.

Quarterback TREVOR SIEMIAN totaled four touchdowns (three passing, one rushing) last week and has at least two touchdown passes in each of his three starts this season. Ingram had a season-high 113 scrimmage yards (88 rushing, 25 receiving). He aims for his third in a row with at least 100 scrimmage yards. Kamara has 14 touchdowns (11 rushing, three receiving) in his past eight home games. Wide receiver MARQUEZ CALLAWAY had his team-leading sixth touchdown reception of the season in Week 11 and aims for his fourth in a row with a touchdown catch. 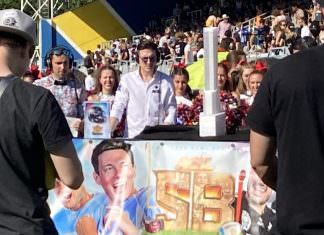