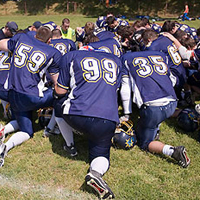 The Novi Sad Dukes left for Croatia without numerous players, including starting quarterback Čaba Juhas, but even with that said, the Zagreb Thunder put in praise worthy effort, limiting the opponent to just six points in the 6-5 Novi Sad win, and shutting them out in the second half.

The 11 point total represents the fewest amount of points scored in a single CEFL game, a point lower than the previous mark set in Ljubljana’s 12-0 loss to the Legionaries in 2006.

Unfortunately for the home team, they too were shut out in the second half, so in the end Novi Sad took the win, but the Thunder at least have some satisfaction in coming so close against a team nobody thought they had a chance to beat. Even more so, because they were also without several players, including their best rusher this year Ivan Klarić, and quarterback Damir Župan.

Thus, the Thunder were forced to start 15-year old quarterback Luka Alaupović and running back Dorijan Kurelić, only third stringers when the season started.

It started as it was expected, with a 37 yard touchdown pass from Rastko Jokić to Boris Kuzmanović in the openning drive, but it was a real nail-biter the rest of the way. Zagreb reduced the score to 6-3 in the second quarter on a 24 yard field goal by Marko Tošić.

Soon after that, Tošić could’ve tied the score, but his second field goal attempt was blocked. All was not lost for Zagreb with the blocked field goal, as Miloš Nikšić tried to score a touchdown, but all he did was go back to his own end zone where he was tackled for a safety by Adrian Zhubi.

Nikšić paid a steep price for his ill-advised move — not only did his team concede two points, he was also injured on the play, not playing the rest of the game.

Though the missing players is a credible excuse, it looks more and more that the Dukes are simply running out of steam, after playing their tenth straight weekend counting the CEFL and the Serbian league. They played without Juhas and many injured players near the end of last season, yet their play didn’t suffer as much.

All this is happening as they’re getting ready for a game that could decide who ends the season as the top team of the South conference. They play the Vukovi next weekend.

For the home team, the Zagreb Thunder, it was the best chance they had for a win this year, but all in all there’s little doubt they will get it, if they keep it up like this. 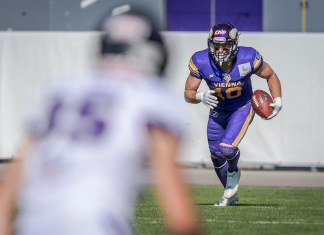