The players with the most career passing yards in NFL history:

The players with at least 300 passing yards in each of their team’s first five games of a season in NFL history:

Pittsburgh quarterback MASON RUDOLPH completed 24 of 28 pass attempts (85.7 percent) for 229 yards with two touchdowns and a 124.6 passer rating in Week 4 to earn his first career victory as a starter. It also marked Rudolph’s third consecutive game with two touchdown passes.

The players with at least two passing touchdowns in each of their first four career games in NFL history:

NOT YOUR AVERAGE QB:

The quarterbacks to reach 1,000 career rushing yards in the fewest games in NFL history:

Tampa Bay linebacker SHAQUIL BARRETT leads the NFL with nine sacks through four weeks in 2019. Barrett, who notched one sack in Week 1, three sacks in Week 2 and four sacks in Week 3, added yet another sack to his total, as well as an interception and a forced fumble, in the Buccaneers’ Week 4 win.

With one sack on Sunday at New Orleans (1:00 PM ET, FOX), Barrett would join Pro Football Hall of Famer KEVIN GREENE (1998) as the only players to reach 10 sacks in their team’s first five games of a season since 1982 when the individual sack became an official statistic.

New England defensive back DEVIN McCOURTY leads the NFL with four interceptions this season, having recorded one interception in each of the Patriots’ first four games of 2019.

With an interception on Sunday at Washington (1:00 PM ET, CBS), McCourty would become the third player in the Super Bowl era to record at least one interception in his each of his team’s first five games of a season.

The players with an interception in each of their team’s first five games of a season in the Super Bowl era: 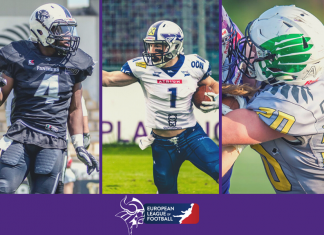