Österreichs Football Portal
Start IFAF Video: World Team Practice
Share
Facebook
Twitter
Linkedin
ReddIt
Pinterest
Email
Despite being from fifteen different countries and not coming together as a team until they landed in Texas on Thursday, the 42-man roster and development team have gelled quickly during the first two practices. The team will have three more sessions of two-a-days on Saturday, Sunday and Monday.

"It is not easy to bring in this many different player and coaches," said head coach GREG MARSHALL. "There are some communication barriers we need to work on, but overall I am very happy. We got in a lot of offense and defense and I think they team is coming together well."

"But we have a great group of kids and it is a great opportunity to work with great people and people from different cultures. It is pretty exciting."

In the afternoon practice the offense and defense came together for a light scrimmage showcasing the talent of the team’s quarterbacks – JAHLANI GILBERT-KNORREN (University of Saskatchewan), German MARCO EHRENFRIED (Schwabisch Hall Unicorns) and Canadian BEN ROSSONG (Sackville High School).  One of the quarterbacks favorite targets was the talented Canadian wide receiver JAKE HARTY (Calgary Colts), who made multiple acrobatic catches.

"It is a great honor to play a team with the best players from around the world," said Harty. "It is cool to have a coaching staff from different parts of the world and to see their coaching philosophies, techniques, and angles of football."

The World team also displayed a big, strong, and talented offensive and defensive line. Along with their size, the players proved to have great mobility including Austrians MICHAEL HABETIN and ALEKSANDAR MILANOVIC. Both also play for the Austrian Senior National team that will compete in the 2011 IFAF Senior World Championship this summer. 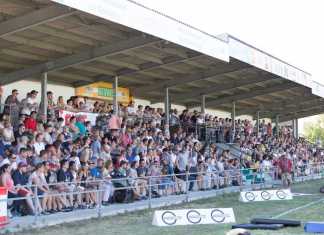