Both teams have outstanding athletes, excellent coaching and have had weeks to prepare their game plans. Breaking news of possible injuries has come and gone. At today’s news conference neither Oregon’s coach Chip Kelly, nor Ohio State’s coach Jim Tressel had anything new to offer. And, predictably, it will be sunny with a comfortable temperature of 73 degrees. That leaves only one thing as uncertain, … What uniforms will the Oregon Ducks wear on game day?

Every game this season the Oregon Ducks have wore a new uniform combination. Over the past several years Oregon, in partnership with Nike, has pushed the envelope on football uniform development. Some college programs are very traditional and haven’t changed their look in decades. Not so for Oregon where uniforms change every game. 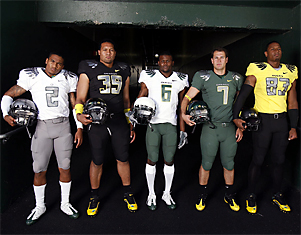 Which combination is your favorite?

However, for the Ducks, who played twelve games this season, five uniform combinations was not enough. New uniform sets were worn during every game this season. For this year’s Civil War game the Ducks went retro, wearing throwback uniforms with the traditional yellow and green that included the old Oregon logo on the helmet.

Prior to every game this year, it has been unknown what uniforms the Ducks would wear. The same is true for the Rose Bowl. Here in Pasadena rumors are circulating that the Ducks will once again go retro. However, I’ve been told, that if the Ducks Quarterback Jeremiah Masoli had his choice, the Ducks would suit-up in all Black.

Speaking with members of the media here, I’ve learned the Ducks reputation for uniform innovation has spread across the country. One member of the Ohio media told me in confidence that when he asked his nephew what he wanted for Christmas he had answered ‚a sick Oregon away jersey would be nice!” (Go Ducks!)

Which combination is your favorite?