Österreichs Football Portal
Start College Football One! Eins!! Uno!!! UN!!!! DUCKS are #1
Teilen
Facebook
Twitter
WhatsApp
Email
Linkedin
Pinterest
This past weekend in Berkeley California the Oregon Ducks defeated the Cal Bears 59-17. The Ducks handed the Bears their worst defeat in the Coach Tedford Era (2001-2012). However, the Cal Bears do deserve some credit. The game was much closer than the score would indicate. With seven minutes to play in the 3rd quarter the Bears had the ball and trailed by only 7 points. Then things suddenly went wrong for the Bears. In less than 22 minutes the Ducks scored 35 unanswered points.
Here’s a quick highlight video of the game

Here is a more complete longer length highlight video. At the 5:00 mark is a great play that shows RB De’Anthony Thomas’ speed and agility.

The Cal defense had slowed Oregon’s running game, and it seemed Cal had a chance to win. But then Cal got “

Mariota-ed”.
Oregon red-shirt freshman QB Marcus MariOta threw for 377 yards and six TD passes, setting a new Oregon record.
Next up for the #1 Ducks are the #13 Stanford Cardinal. It’s the best game of the weekend with the winner hosting the Pac-12 Championship game. ESPN’s GameDay program will be in Eugene.

Stanford is having an excellent year. With an 8-2 record Stanford is in 2nd place in the Pac-12 North Division. The graduation of Andrew Luck, who went as the first pick of last year’s NFL draft, was expected to hurt. However except for close losses to Washington and Notre Dame, Stanford has overcome every test. Now they face their ultimate challenge in Autzen Stadium. Here’s an

15:00 Uhr (MEZ):
Week 12 From Autzen Stadium, Eugene, OR
Host Chris Fowler and the College GameDay team bring you analysis and reports as they build up to kick-off.

ESPN America
Before going I’d like to leave you with the motivational video shown to the Oregon players prior to the Cal game. It is interesting to see the evolution of these videos. In the past, the videos attempted to “pump-up” the players with excitement. Now, the Ducks are a tight football machine. The new videos extoll the players to execute. 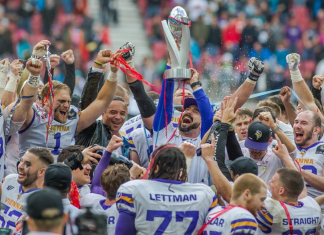