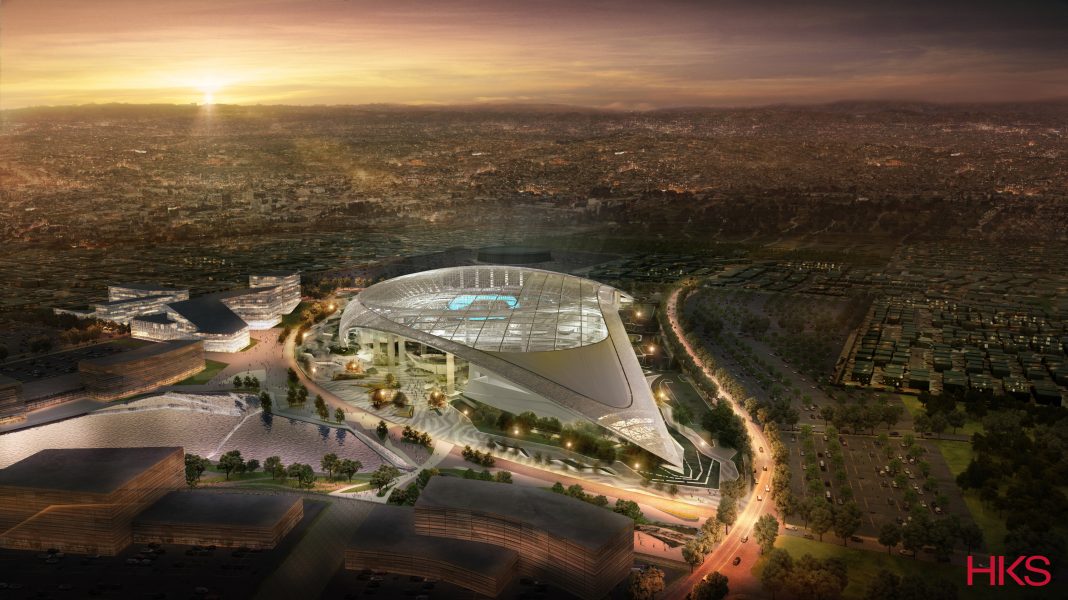 The District at Hollywood Park will feature world-class sports and performance venues, office, retail and residential spaces, and more than 20 acres of parkland. The centerpiece of The District is LA Stadium, the future NFL home of the Los Angeles Chargers and Rams set to open in 2020.

The NFL will develop a 200,000 square foot space to headquarter operations for hundreds of employees at NFL Network, NFL.com, the NFL app and NFL RedZone.  In addition to office and studio space, the facility also will feature NFL Media’s first outdoor studio and space to host studio audiences.  The new NFL Media campus is expected to open by the summer of 2021.

„This is a tremendous partnership that will bring new business and jobs to Inglewood and throughout Greater Los Angeles,“ said Kroenke. „The NFL is the most-watched programming in the country and having NFL Media in our district is an important step in creating a global destination at the center of the world’s entertainment capital.  The interest in this development and the stadium has been incredible and NFL Media’s presence will further revitalize a proud and historic part of the Los Angeles landscape. I would like to thank my fellow NFL owners and Commissioner Goodell for believing in our mission and vision for this entire development.“

NFL Media is the world’s only media company that is completely devoted to the United States‘ most-popular sport.  NFL Network had a record-breaking season in 2017, becoming the second most-watched sports cable network.  With its companion digital products, NFL Media comprises one of the largest sports platforms in the world.

„As home to the Rams and Chargers, and now NFL Media, the LA Stadium and Entertainment District will be an attraction for NFL fans year-round,“ said Goodell.  „Thanks to Stan’s vision, we know Hollywood Park will be the place to be – not just for football, but for entertainment and events, for living and for working.  We are excited for NFL Media to join this transformative project.“

ABOUT L.A. STADIUM AND ENTERTAINMENT DISTRICT

The Los Angeles Stadium and Entertainment District at Hollywood Park (LASED) is transforming the site of the former Hollywood Park Racetrack to a year-round sports and entertainment destination for the enjoyment of people throughout Southern California as well as visitors to the region.
The centerpiece of the 298-acre sports and entertainment district, LA Stadium provides for a seating capacity of 70,000, expandable up to 100,000, with 260 luxury suites, more than 13,000 premium seats, and almost three million square feet of usable space. The project will include a 6,000-seat performance venue located under the same roof canopy as the stadium.

LA stadium will be home field for the Los Angeles Rams and Los Angeles Chargers starting in 2020. It will host year-round sports and entertainment events and has already secured Super Bowl LVI in February 2022, the College Football National Championship game in 2023 and the Opening & Closing Ceremonies of the 2028 Olympic Games.

Adjacent to the stadium and performance venue, the project anticipates an initial phase of more than 1.5 million square feet of retail and office space, 1,500 residences, a hotel and more than 20 acres of parks. The long-term plans offer the possibility of developing additional phases over time.