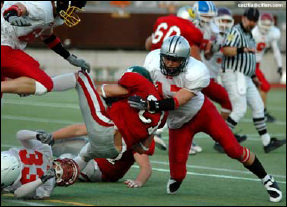 Austria started with the ball and could advance very easy in the beginning when the danish defens put up a show in mistackles and the fast Austrian runningbacks spun up the danish defense really good. But on the danish 25th yardline they got stopped and tried a 42 yd field goal that was just missed.

But the danish team could not take care of the opportunity given and fumbled the ball and the austrian runningback Andrej Kliman could start to produce on the ground. But every second play his yards would be taken back when someone of his team mates caused a penalty. Over the game they had 112 yds of penalties. But finally Kurt Lojka could cross the danish goalline and the score was 7:0 after the first quarter.

And now the austrian machine was up and running, they pounded them self through the danish defense yard by yard. Denmak MVP Kasper Öelund did anything in his power to stop them but even his 18 tackles of the game was not enough when Kliman made a TD. And on the following austrian drive QB Bernd Dittrich, named MVP, made a 40 yd draw for TD and the score was 21:0 after good kicker Philipp Heissl made one of his seven extra points.

Then all of a sudden Denmark woke up and the timing between the danish QB Michael Knudsen and his receivers started to work. With passes to Niclas Sörensen, Mads Rasmussen and Kevin Gangelhoff altered with his own nice runs they marched down to the Austria end zone and Gangelhoff scores a TD but the extra point failes and the half is over.

Denmark opens the second half with an onside kick that fails but they will get the ball right back after an austrian fumble on a forth down try and Denmarks nice play continues. Austria have a couple of deep passas but danish CB Tor Strandgaard makes the break up and the third quarter ends with a monster hit by Austrian Marko Radovanovic.

Denmark continues to play well and Fredrik Frandsen finally makes the score 14:21 and the game is on again. But the Austrians comes right back and QB Dittrich scores his second for the day on a sneak. Denmark have one more shot at scoring a TD but on the Austrian 2 yd line they fumble the ball and Austria kan kill the game with a TD from Florian Hiess and the game ends 35:14 to Austria.

Austria looks really strong for the rest of the tournament but have to stop getting penalties. Their HC Bernhard Binstorfer agrees after the game but also wants to blame some of the flags on the refs that were a little bit of picky. Denmark got some major injuries but HC Lars Carlsen thinks that they showed today that when they play at their best they kan beat teams like Austria and Germany that they play in two days.