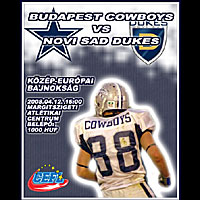 The Cowboys missed a field goal early in the first quarter and that was as close as they came to scoring all game.

With the score as it is, the Dukes managed to start the season with a win, just like last year when they beat the Vukovi on a stop in the final seconds of the game. This time it was in a lot less dramatic fashion, as they won 29:0, even resting their key players, like quarterback Čaba Juhas and running back Marko Đanić, midway through the third quarter.

Ungarische Offensive lahmt
While the Hungarian offense struggled to move the chains, Dukes took what the Cowboys gave them, and advanced steadily on outside runs and short slants. The first points of the game came on an over the head snap in a punt situation, resulting in a safety.

In the second quarter Marko Đanić ran for a touchdown from close range after a Cowboys fumble and Mitar Bajčetić made a nice catch to push the lead to 16 points. After some powerful running from Đanić, Juhas ran in for the next score from close range, making it 22:0 with the missed extra point. From here on Juhas handed over the quarterback spot to Rastko Jokić, who ran for another touchdown to put the game away in the third quarter.

Hoher Preis für den Sieg
Dukes‘ win came at a price though, as their starting left tackle Aleksandar Doder injured his ankle and fullback Laslo Silađi broke his finger. Fortunately for them, their next game is in two weeks when they play the Silverhawks at home. Cowboys have even more time, because they won’t play in CEFL until the 3rd of May.