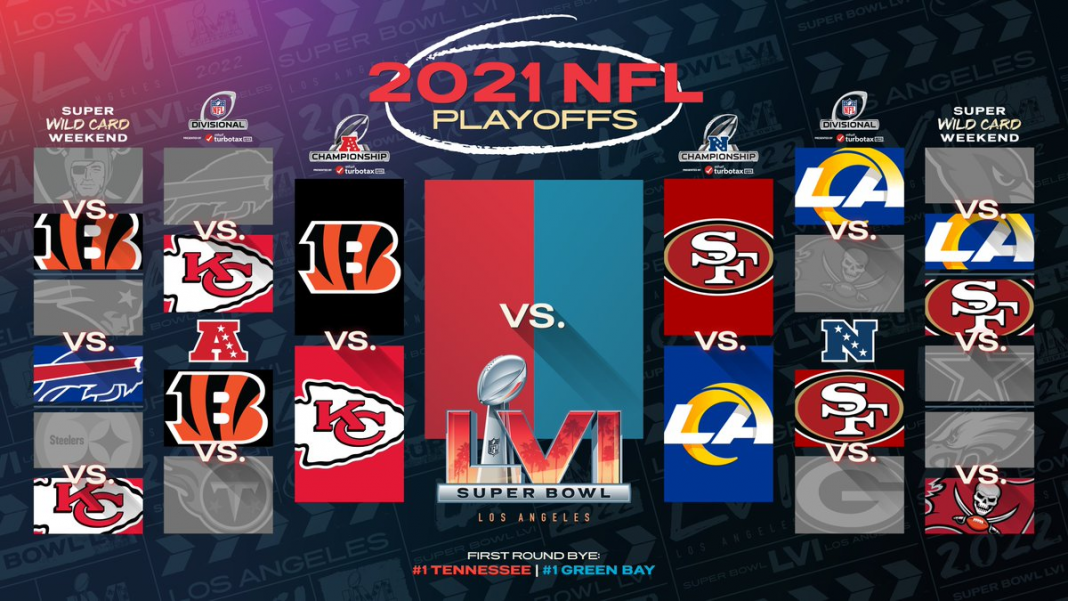 With Cincinnati and San Francisco, this marks the fifth year since 1970 in which multiple teams have advanced to their conference Championship Games the year after finishing in last or tied for last place in their divisions.
If either team wins this weekend, it will become the fifth team to advance to the Super Bowl the season after finishing in last place in its division since 2000.

The teams to appear in the Super Bowl the season after finishing in last place in their division since 2000:

Each of the four head coaches remaining in the 2021 postseason can cement themselves in NFL history with victories on Sunday.

In the AFC, Kansas City’s ANDY REID became the fifth head coach in league history to guide his team to at least four consecutive Championship Games. He is aiming to advance to his fourth Super Bowl as a head coach, and third with Kansas City. Overall, Reid has 19 postseason wins, tied with Pro Football Hall of Famer DON SHULA for the third-most in league history.

"When it's grim be the Grim Reaper."

Andy Reid on what he said to Patrick Mahomes when they were down late in the game. pic.twitter.com/kIIj2rdqOL

With a win on Sunday, Reid will tie Pro Football Hall of Famer TOM LANDRY (20 wins) for the second-most postseason wins by a head coach all-time. Only BILL BELICHICK (31) has more.

The head coaches with the most career postseason wins in NFL history:

Cincinnati’s ZAC TAYLOR is looking to become the sixth individual in league history to win each of his first three career postseason games as an NFL head coach and the first since DOUG PEDERSON in 2017.

"We got hot at the right time."

Zac Taylor says this young #Bengals team isn't ahead of schedule because there never was a schedule.

They're here – and the trophies at Paul Brown Stadium could soon make room for another. pic.twitter.com/YwmF8s8zYV

In the NFC, both San Francisco’s KYLE SHANAHAN, who brought the 49ers to Super Bowl LIV in 2019, and Los Angeles’ SEAN MCVAY, who took the Rams to Super Bowl LIII in 2018, are looking to advance to their second Super Bowls as a head coach.

Each coach was hired by his current club in 2017. The winner of the NFC Championship on Sunday will become the fifth individual in league history to advance to two Super Bowls within his first five seasons as an NFL head coach.

The individuals to advance to two Super Bowls within their first five seasons as a head coach in NFL history:

KANSAS CITY OF CHAMPIONS: The KANSAS CITY CHIEFS are the first team in league history to host four consecutive Championship Games. With a win on Sunday, they would become the fourth team all-time to advance to three-or-more consecutive Super Bowls.

The teams to appear in at least three consecutive Super Bowls in NFL history:

Quarterback PATRICK MAHOMES led the Chiefs to each of the past two Super Bowls and with a win on Sunday can become the 13th quarterback all-time to start in three-or-more Super Bowls. The sixth to do so before turning 30 years old. Mahomes, who will be 26 years and 149 days old on the day of Super Bowl LVI, would become the youngest quarterback in NFL history to start three Super Bowls.

Who has the most passing TDs in their first 10 career playoff games? That would be @PatrickMahomes, of course, with 25. 🔥 pic.twitter.com/5uiCv4HKYO

The players with the most games with at least three touchdown passes in a single postseason in NFL history:

THE @CHIEFS WIN THE GAME OF THE YEAR! #NFLPlayoffs #ChiefsKingdom pic.twitter.com/9eM2Ur15O0

The players with the most postseason receptions in NFL history:

Cincinnati quarterback JOE BURROW is expected to become the first quarterback ever drafted first overall to start a conference Championship Game within his first two seasons.

Under pressure the whole game and he still got 348 pass yards and a playoff dub.@JoeyB is that dude.@Bengals | #RuleTheJungle pic.twitter.com/YeHsEV2DjZ

With a win, Burrow, who was selected with the first overall pick out of LSU in 2020, will become the third quarterback selected in the first round of the NFL Draft to start a Super Bowl within his first two seasons in NFL history, joining Pro Football Hall of Famer DAN MARINO and BEN ROETHLISBERGER.

Burrow enters Championship Sunday after completing 28 of 37 attempts (75.7 percent) for 348 yards in the Divisional Round against Tennessee. On Super Wild Card Weekend against Las Vegas, he completed 24 of 34 attempts (70.6 percent) for 244 yards and two touchdowns.

On Sunday, Burrow can become the first quarterback ever to record a completion percentage of 70-or-higher in each of his first three career postseason games (minimum 25 attempts).

Burrow’s top target this season has been wide receiver JA’MARR CHASE, who recorded 1,455 receiving yards in the regular season. The most by a rookie in the Super Bowl era. After recording 109 receiving yards last week and 116 in the Wild Card Round, Chase’s 225 postseason receiving yards are the third-most ever by a rookie.

The rookies with the most postseason receiving yards in NFL history:

When the LOS ANGELES RAMS host the NFC Championship Game at SoFi Stadium on Sunday, it will mark the first time in league history that a Championship Game will be played in the same stadium that will host that year’s Super Bowl.

With a win on Sunday, the Rams will become the second team ever to play in a Super Bowl in its home stadium, joining the TAMPA BAY BUCCANEERS, who won Super Bowl LV at Raymond James Stadium last year.

Either the Rams or their opponent this week, the SAN FRANCISCO 49ERS, will become the sixth team ever to play in a Super Bowl that was hosted in its home state.

The Super Bowls with a team playing in its home state:

Los Angeles quarterback MATTHEW STAFFORD is set to appear in his first-career Conference Championship. He ranked second in the league with 41 touchdown passes during the regular season in his first season as a Ram.

Stafford can become the fifth different quarterback in league history to record at least 40 regular-season touchdown passes and reach the Super Bowl in the same season.

The quarterbacks to record at least 40 regular-season touchdown passes and reach the Super Bowl in the same season:

.@CooperKupp put the team on his back.

The players to lead the league in receiving yards and reach the Super Bowl in the same season in NFL history:

With a sack on Sunday, Miller will become the fifth player since 2000 to record a sack in at least five consecutive postseason games.

The players with a sack in at least five consecutive postseason games since 2000: