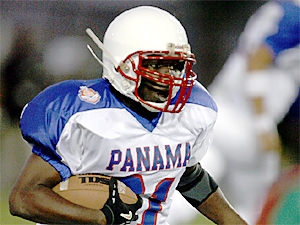 Panama raced to a 26-0 lead in the second quarter and dominated as the Bahamas were beset by fumbles and struggled to contain the marauding home defense. Panama will now travel to take on Mexico on February 14 in Mexico City. The winner will join the other seven qualifiers to complete the eight-team, four-continent field for the 2009 IFAF Junior World Championship in Canton, Ohio from June 27 to July 5.

Earlier on Saturday, New Zealand won 12-7 in Australia to join USA, Canada, Japan, Germany, Sweden and France among the group of nations that have reached the inaugural tournament, which will kick off at Fawcett Stadium at the Pro Football Hall of Fame on June 27.

The Bahamas proudly made history in defeat, becoming the first American football team from the islands to take part in international competition. The nation’s youth program is less than two years old, but the Bahamas American Football Federation (BAFF) has been eager since its formation to meet the IFAF objective that all of its 52 member federations should enter competitions and tournaments.

"They return home as heroes and young men who can one day can say to players who will follow that they were the first to represent their country in the sport of American Football,” said BAFF representative Tammi Mitchell. "They played at a high level, despite many saying they would never get there, so these 45 Bahamas players who took on Panama should be very proud.”