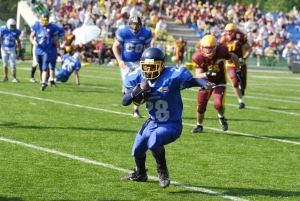 The Vukovi Belgrade beat the Ljubljana Silverhawks 41-0 in a match that was pretty much expected with these two teams playing. With one missed extra point, Belgrade scored six touchdowns, three rushing and three passing, but what was unusual this time is that Andrej Tasić passed for only one touchdown and two came from Briton Burge.

Burge has been with Belgrade this season primarily as a skill position coach, but has been licensed since the start of the year and suited up for this game. His presence on the field didn’t mean that the older Tasić was benched; instead, they were on the field at the same time for most of the game, with Belgrade’s starting quarterback usually lining up as a receiver or in the backfield.

The Vukovi scored three touchdowns in the first three quarters, first on a pass from Andrej to Pavle Tasić for a 20 yard touchdown on the Vukovi’s first drive, and then a 7 yard throw from Burge to Aleksandar Lazović in the second quarter. Prior to that Burge took the handoff from Andrej Tasić and hooked up with Pavle Tasić that gave Belgrade the ball at the two yard line.

In the second half, we saw a little bit of the last and this year’s Vukovi when Andrej Tasić ran to the 9 yard line, like he did most of last year, and after that Jovan Golušin simply went down the middle running over people for a score, like he has been doing most of this year.

Despite their 21-0 lead, Belgrade didn’t exactly crush the Silverhawks, at least not until the 4th quarter. Uroš Milić finished the game similar to the one against the Wild Boars; he ran 49 and 37 yards on back to back drives for a 34-0 score after the extra point was missed on the first of the two touchdowns. Dušan Lalić failed to score on an interception return, due to being tackled by his own teammate, but Belgrade did score one last time when Burge threw his second touchdown pass to Pavle Tasić.

‚This is a young team; we had a couple series when we started clicking but didn’t execute in the end. These guys train hard and we’re going to get better. Belgrade’s a tough team and they gave 100% on every play today”, said Robert Cochran of the Silverhaws.

‚We didn’t practice the way we should have in the past three weeks. That affected our play and made us nervous in the first half, but in the second it was where it should be. Briton will be a great addition for us the rest of the way”, said Pavle Tasić whose 2 touchdowns were enough to better position him as the receiving leader in SELAF this year.