And here’s the evidence: through Week 7, there have been 57 games decided by seven or fewer points, the most  at this point of a season in NFL history.
The New England Patriots and St. Louis Rams are no strangers to close games as all seven Rams’ games and five of seven Patriots’ games have been within seven points at some point of the fourth quarter. And four of seven games for both clubs have been decided by six points or fewer. These two teams will meet on Sunday as the NFL returns to London and historic Wembley Stadium for the sixth International Series game in as many seasons.
“We had a lengthy meeting and the players are all excited,” says Rams head coach JEFF FISHER, whose entire team took part in a youth football clinic today with approximately 500 children at London’s Regent’s Park “They’re looking forward to the experience.”
St. Louis (three) is one of three teams – joining Indianapolis (three) and Minnesota (five) – that has already surpassed last year’s win total.
New England amassed 381 total net yards in its 29-26 overtime victory against the New York Jets last week. The Patriots have posted at least 350 total net yards in 16 consecutive games, tied with the Rams (1999-2000) for the longest such streak in NFL annals. New England currently leads the NFL in total offense with 436.1 yards per game.
“They’re excited and looking forward to the opportunity to play well on Sunday against a new opponent that we have to get to know and become familiar with,” says Patriots head coach BILL BELICHICK. “It’s a very young and aggressive and fast and explosive team. Hopefully we’ll be up to that challenge.”
Also included on the docket in Week 8 is a key NFC West match-up between the 5-2 San Francisco 49ers and 4-3 Arizona Cardinals with first place on the line on Monday Night Football.
Some of the key games this weekend:

The Buccaneers and Vikings will kick off Week 8 on Thursday Night Football in Minnesota.
The Vikings, who have a 4-0 record at home this season, defeated Arizona 21-14 in Week 7. Minnesota was led by running back ADRIAN PETERSON, who rushed for a season-high 153 yards and one touchdown. The six-year veteran registered his ninth career game with at least 150 yards, the most among active players. Peterson (29) also tied ROBERT SMITH for the most 100-yard rushing games in franchise history.
“We have shown that we can be productive in the run game and the pass game,” says Peterson on the keys to the Vikings’ early season success after a 1-6 start a year ago.
***************************
NFL FACTOID: Through the first seven weeks, there are 17 teams at or within one game of a .500 record. That’s the highest total through Week 7 since 1970.
***************************
Meanwhile, Tampa Bay aims to get back on the winning track after a 35-28 loss in Week 7 against New Orleans.
“This is a league that comes down to execution,” says Buccaneers quarterback JOSH FREEMAN. “You can have the best scheme in the world, but if you are unable to execute, then it’s all for naught.”
Freeman passed for 420 yards last week, the third-most passing yards in a single-game in franchise history, trailing only DOUG WILLIAMS (486) and VINNY TESTAVERDE (469). In his past two games, Freeman has totaled an NFL-best 748 passing yards and is second in the league with six touchdown passes, trailing only AARON RODGERS (nine).

NFC East rivals will meet on Sunday at Cowboys Stadium. The Giants look to build on their come-from-behind victory last week, while the Cowboys hope to sweep the season series after their win on Kickoff Weekend.
Trailing Washington 23-20 with 1:13 remaining in the fourth quarter last week, Giants quarterback ELI MANNING connected with wide receiver VICTOR CRUZ for a 77-yard touchdown pass, the longest game-winning touchdown in the final two minutes of a game in franchise history.
The defending champions are in first place in the NFC East and have won three consecutive games.
“We understand that it’s a division opponent and we have to be ready to play,” says Cruz. “Giants versus Cowboys is always a big game. They’re coming off a solid win against Carolina and we want to be able to match their intensity and come out firing.”
The Cowboys improved to 3-3 last week with a 19-14 win at Carolina. Dallas got timely stops on defense and two field goals by kicker DAN BAILEY late in the fourth quarter. The Cowboys seek back-to-back wins for the first time this season.
“I think each week you have to start fresh and work hard,” says Cowboys wide receiver MILES AUSTIN, who caught the eventual game-winning touchdown in the Cowboys’ 24-17 win against the Giants on Kickoff Weekend. “It’s going to be big. It’s obviously a huge week, they all are.”

With a bye in Week 7, both the Falcons and Eagles are back in action on Sunday and will meet for the fifth consecutive season.
Atlanta is off to its best start in franchise history at 6-0 and is the NFL’s only undefeated team. Falcons tight end TONY GONZALEZ (99), who needs one touchdown reception to become the eighth player in NFL history to reach 100 career TD catches, knows his team still has plenty to accomplish.
“It’s a special feeling,” says Gonzalez on being 6-0. “I’ve been there before. It doesn’t mean anything in the grand scheme of things as far as our goals are concerned. But it’s a great start and we’ve got to build off of it.”
Falcons quarterback and Philadelphia native MATT RYAN seeks his first win at Lincoln Financial Field. Ryan tied a career-high four touchdown passes against Philadelphia last season in the Falcons’ 35-31 win in Atlanta.
Philadelphia has lost its past two games, but is confident coming off the bye. The Eagles have won 13 consecutive games after a bye, the longest such winning streak since the bye was instituted in 1990.

A matchup between two of the NFL’s most prolific passers will unfold in Denver when the Broncos host the Saints on Sunday Night Football.
New Orleans quarterback DREW BREES has led his club to two consecutive wins after an 0-4 start to the season. On Sunday, Brees (299) needs two touchdown passes to surpass Pro Football Hall of Famer and former Broncos quarterback JOHN ELWAY (300) for the sixth-most TD passes in NFL history.
“We want to get on a streak here,” says Brees. “Now we’ve got two. We want to keep that going.”
Denver had a bye in Week 7 after the team’s come-from-behind 35-24 victory at San Diego in Week 6. The Broncos overcame a 24-0 deficit and became the first team in NFL history to win by double-digits after trailing by at least 24.
Denver quarterback PEYTON MANNING registered his 47th career game-winning drive in the fourth quarter or overtime to tie Pro Football Hall of Famer DAN MARINO for the most by a player since 1970.
Manning has 36 career games with at least three touchdown passes and zero interceptions, including two such games in 2012. With at least three touchdowns and zero interceptions on Sunday night, Manning would surpass BRETT FAVRE (36) for the most such games in NFL history.
2012 NFL STANDINGS 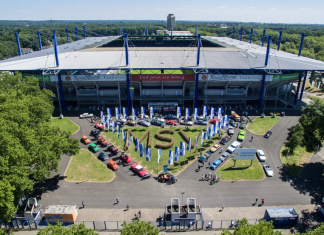