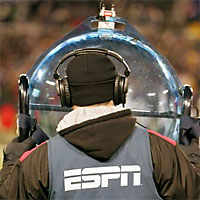 Resilient Favre
Minnesota quarterback Brett Favre started his 270th consecutive game in the Vikings‘ 34-20 win over the Cleveland Browns, tying Jim Marshall for the longest starting streak in NFL history.  Marshall started 270 games in a row for Minnesota from 1961-1979.  He played 12 games with Cleveland in 1960, but official records of starters were not kept before 1961. However, the Browns‘ internal records – including highlight films, score sheets, game-day programs, newspaper clips and conversations with former players – indicate that Marshall started the first game in 1960, but did not start the final 11 games of that season while playing a significant back-up role.

A look at the longest starting streaks on record, as published in team media guides:

Peterson also became the first player in NFL history to rush for at least 180 yards and three touchdowns on Kickoff Weekend.

The running backs to rush for at least 100 yards in each of the first three Kickoff Weekend games in which they appeared:

Run Stoppers
The Baltimore Ravens defense extended the NFL’s longest current streak – 36 games – of not allowing a 100-yard rusher in a 38-24 win over the Chiefs.  Kansas City running back Larry Johnson, who was the last player to gain 100 yards against the Ravens (120 yards on December 10, 2006) posted a team-high 20 rushing yards against Baltimore.

The longest current streaks without allowing a 100-yard rusher:

Streak halted
Mark Sanchez became the first New York Jets rookie quarterback to start a game since Matt Robinson on November 13, 1977 against the Seattle Seahawks. Sanchez ended the Jets‘ streak of 491 consecutive games without starting a rookie quarterback (previously the longest in the NFL).

Sanchez also became the first rookie quarterback since Pro Football Hall of Famer Roger Staubach of the Dallas Cowboys (1969) to start on Kickoff Weekend for a team that finished the previous season with a winning record.  The Jets posted a 9-7 (.563) record in 2008.  Sanchez completed 18 of 31 passes (58.1 percent) for 272 yards and one touchdown in the Jets‘ 24-7 victory.

"It is amazing how productive he is at only six feet tall."
— Steve Mariucci on Saints QB Drew Brees, who threw for an NFL Kickoff Weekend-record six touchdowns

"Owens is chilling in western New York on VH1 and these guys are looking tip top.”
— Rich Eisen on Cowboys receivers, who had a combined eight receptions for 263 yards and three touchdowns

"That’s what you do when you lose your superstar receiver. It is not one guy, it’s everybody.”
— Steve Mariucci on success of Dallas Cowboys pass catchers

"Feeling Mario Williams rushing on the outside, he backpedals. I’ve never seen this before."
— Steve Mariucci on Jets rookie QB Mark Sanchez, who completed a third-quarter pass to Jerricho Cotchery while backpedalling — rather than stepping up in the pocket — to avoid the pass rusher

"This is the best secondary in the NFL.  They are ball hawks.”
— Deion Sanders on Green Bay Packers secondary, which had three interceptions vs. Bears

"One of the best in NFL.”
— Steve Mariucci on Seahawks linebacking corps

"Mike DeVito, no relation to Danny, on the recovery."
— Rich Eisen on Jets DE Mike DeVito, who recovered a key second-quarter fumble

"I was impressed with the offense. What concerned me was the defense. A Tampa offense, which was just put together recently, moved the ball well."
— Steve Mariucci on the Dallas Cowboys

"Cadillac got a tune-up."
— Deion Sanders on Buccaneers RB Carnell ‘Cadillac‘ Williams who returned from injury to win starting job. He rushed for 97 yards and a touchdown against Cowboys.

"If he can work the middle of the field, it’s going to be a great year for the Falcons."
— Deion Sanders on Atlanta TE Tony Gonzalez, who had 73 yards and a touchdown in his Falcons debut

"He’s gone, and there was nothing any of us could do about it."
— Rich Eisen on Broncos WR Brandon Stokley’s 87-yard game-winning catch and run