The initiative, which is in its fifth year, enhances the development of elite football talent from around the world. A total of 16 players from seven different IFAF (International Federation of American Football) member countries have earned positions on the practice squad rosters of teams in the AFC North, AFC West, NFC South and NFC West Divisions. They are eligible to undertake playing time only during the NFL preseason then will earn an exception on NFL team practice squads.

French safety Sebastian Sejean, who first played football near his native Paris for Les Molosses D’Asnieres and then for Les Spartiates D’Amiens, lined up for the St Louis Rams in a 7:6 win over the San Diego Chargers. The former University of Laval standout played in the third and fourth quarters, contributing to the team’s victory with three tackles, giving him a total of five tackles for the 2008 preseason.

Mexico City native Mauricio Lopez, a defensive tackle for the Oakland Raiders, recorded two tackles against the Tennessee Titans. Both stops came during the fourth quarter of a close 17:16 loss for the Raiders and were Lopez’s first solo tackles of the season adding to an assisted tackle he made last week against the San Francisco 49ers.

‚I am fortunate to have the opportunity to be on a team that is so united,” said Lopez, who played college football at Monterrey Tech and won two Borregos Championships. ‚It is somewhat difficult to integrate into something that was structured before I arrived. It is not easy, but slowly with time you begin gaining the rhythm of the routine and you begin to grasp things.”

Five other players from the NFL International Practice Squad Program saw playing time during the second week of NFL preseason.

British wide receiver Marvin Allen featured for the Pittsburgh Steelers in a 24:21 loss to the Buffalo Bills in a game played at the Rogers Center in Toronto, while Swedish linebacker Carl-Johan Bjork lined up for the Cincinnati Bengals in a loss to the 27:10 Detroit Lions.

A week after becoming the first Russian player to record a tackle in an NFL game, safety Sergey Ivanov played against the New England Patriots, winning 27:10 as the Tampa Bay Buccaneers moved to 2-0 in preseason. Mexican tackle Ramiro Pruneda of the San Francisco 49ers helped his team defeat the Green Bay Packers 34:6 and countryman Salomon Solano played in the Baltimore Ravens‘ 23:15 loss to the Minnesota Vikings.

Among the anticipated highlights of week three of the NFL preseason, UK running back Jermaine Allen of the New Orleans Saints could come face to face with Sweden’s Carl-Johan Bjork of the Cincinnati Bengals. Other match ups with international players include Seattle at San Diego, Arizona at Oakland, Baltimore at St. Louis, and Carolina at Pittsburgh. 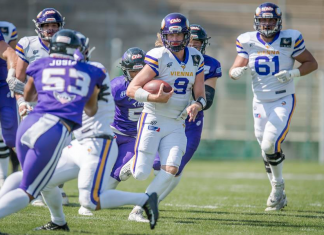