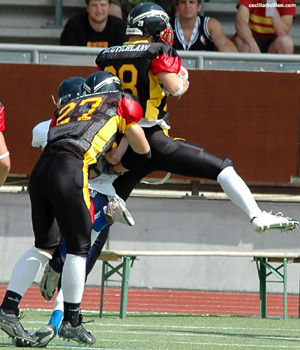 But the savour of the day was MVP Daniel Berg that time by time made crusial runs in important downs.
Todays game was a decider whom to face France in the final Sunday.

As now almost a habit in the championship Germany ended their first drive with a field goal after Daniel Berg worked his was over the field with first down runs and two important catches by German TE Kasim Edebali.

Austria started of slow and a bit nervous and as soon as the Germans got the ball back QB Fabian Schorn delivered a 50 yd pass to Patrick Klein for a TD and the score was 10:0 Germany after the first quarter.

The second quarter was totally dominated by the Austrians and their MVP RB Andrej Kliman whom scored two TD’s today and he ran for 109 yds. His first came with seven minutes to play in the first half and QB Bernd Dittrich also ran for a TD before half time. So all of a sudden Austria has one leg in the final with the score 14:10.

The seond half started the same way as the first ended and the germans had several turnovers and unnessessary penalties that killed every drive. The Austrian defens played extremly well and Ramon Abdel Azim Mohammed and Marko Radovanovic record over 10 tackles each in the game. Kliman runs for his second TD before the third quarter ended and Austria in the beginning of the fourth feals like a comfortable lead. But the Austrian defense starts to make misstackles At the same time Germany puts in a new QB in Mario Keller that gets the German offens going again.

Finally Mathias Baumbach is the one that ends the German scorless quarter and receives a pass from Keller in the end zone. The previous solid Austrian defense is not that solid anymore and the Germans march all over the field again for a TD from Berg with a 31 yd run with 1.20 left of the game and 25:21 Germany. Austria makes a final attempt to score but doesn’t get any further that the German 30 yd line and the game is over.

MVP Berg in Germany rushed for 189 yds said after the game that the German team played for their injured DE Marcus Donner that had to fly home. MVP Kliman in Austria ment that it was the little things that made them lose the game, a missed tackle here, a dropped ball there, a missed block etc. Today Size defeated Speed, on Sunday we will see if it repeat itself when Germany face France in the final.

More pictures of the game can be fetched from photographer Cecilia Håkanssons homepage later on today or tomorrow at: www.cillen.com/ejc2006 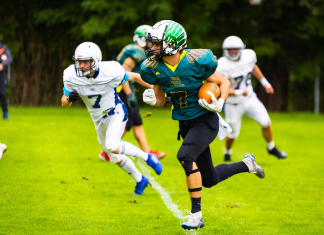