A fifth-year senior and repeat team captain who enters his second year as a starting wide receiver after spending three years at quarterback.

2007: Team captain … Selflessly volunteered to move from quarterback to wide receiver during the spring and ended up ranking second on the squad with 30 catches and 404 receiving yards with two touchdowns … Also made an impact on special teams … Was given the team’s Football Alumni Award after the season for being the ultimate team player … Blocked a punt for a safety just 1:05 into the Rutgers game (Nov. 3) … Racked up 60 yards receiving in the win over USF (Oct. 27) including a 38-yard catch and run … Had a touchdown grab during UConn’s fourth quarter rally to beat Louisville (Oct. 19) … Caught a season-high five passes against both Virginia (Oct. 13) and Temple (Sept. 15) … Scored UConn’s first touchdown of the year on a 57-yard passing play at Duke (Sept. 1), part of a 69-yard receiving day in his debut at wide receiver.

2006: Played in seven games with six starts missing some time due to injury … Completed 86-of-147 passes (58.5 percent) for 849 yards with nine scores and nine interceptions … Also ran the ball 82 times for 222 yards and a pair of touchdowns and even caught one pass … Completed 19-of-29 passes for 188 yards at Syracuse (Nov. 18) with two touchdown passes along with a trio of costly interceptions … Spurred UConn onto one of its most thrilling victories ever, a 46-45 double overtime win against Pittsburgh (Nov. 11). Completed 20-of-29 passes for 164 yards and a career-high four touchdowns against the Panthers, while rushing 17 times for 130 yards and the game-winning two point conversion. Led UConn on fourth quarter touchdown drives of 98 and 77 yards to erase a 31-17 deficit and force overtime. His 130 rushing yards in the game are the most by a Husky signal caller since 1968. Shared the offensive game ball with Donald Brown and was outright named the BIG EAST Offensive Player of the Week … Hit on 19 of his 32 passes against Wake Forest (Sept. 16) for 197 yards and a touchdown with a pair of interceptions … Started the season opener against Rhode Island (Aug. 31) and compiled a 208.58 efficiency rating by completing eight of his 13 passes (62-percent) for 149 yards with two touchdowns. It marked the first time a Husky had a 200-plus passer rating in a game since Sept. 4, 2004. Also ran for a score against the Rams, accounting for three touchdowns in all.

2005: Played in seven games with two starts, coming against Cincinnati (Oct. 15) and Louisville (Dec. 3) … Completed 46-of-90 passes on the year for 515 yards with six touchdowns and just one interception, good for a team-best 118.96 efficiency rating … Also ran the ball 64 times for 286 yards with one touchdown … Completed 18 of his 32 passes for 255 yards and three touchdowns without an interception for an 154.13 rating against Louisville in the season-finale with a bowl bid on the line. Also led UConn in rushing against the Cardinals with 49 yards, running for four first downs on his own in addition to the 11 that his passes picked up. His 304 all-purpose yards in the game were the best by a Husky all season … Made his first career start at Cincinnati and, while breaking his non-throwing wrist during the game, still threw for 191 yards and two touchdowns while rushing for 70 more yards … After Matt Bonislawski fractured his clavicle against Syracuse (Oct. 7), came off of the bench to guide UConn to victory, completing 50% of his passes and rushing for 86 yards and a TD. The 86 yards tied for the team lead and was nearly UConn’s first 100-yard rushing game by a quarterback since 1980. Earned the team’s offensive game ball for his efforts against the Orange.

High School: 2003 Connecticut Gatorade Player of the Year who was nominated for the Army All-American Game … Named first-team All-State by the New Haven Register as a senior and also named to the Hartford Courant’s All-State team … Rated as one of the top 10 prospects in New England … The first player in state history to both rush and throw for over 3,000 yards in his career, gaining 3,116 yards and 45 touchdowns on the ground and 3,114 yards and 31 TDs through the air … As a junior, became the first Bristol quarterback to gain over 1,000 yards rushing (1,599) and passing (1,302) in the same season, while also lending a hand in a combined 34 touchdowns (19 rushing and 15 passing) … Threw for three touchdowns and ran for two more in the 2004 Governor’s Cup All-Star Game at Rentschler Field … Spent his first two seasons at Bristol Central as a wide receiver … Also a two-time All-State basketball player, helping guide Bristol Central to the 2003 state class LL championship, averaging 20 points per game … Named All-Conference in baseball after batting .368 in 2003 … Graduated with 10 varsity letters (four in football, three each in basketball and baseball) … Team captain in both football and basketball … Honors student.

Personal Profile: Dennis John Hernandez … Born on May 18, 1986 … Late father, Dennis, lettered at UConn in 1976 as a defensive back and his uncle, David, also played at UConn before transferring to Louisville … Earned his bachelor’s degree in human development and family studies and is working towards a master’s degree in educational psychology. 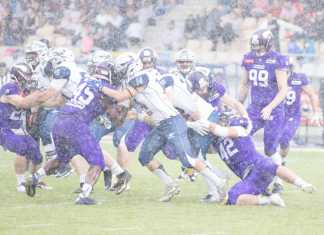