Unlike all the previous games between Belgrade and Kragujevac, where the Wild Boars almost always found a way to beat the highly motivated Vukovi, the team from Belgrade this time cruised to a 34:0 win dealing a hard blow to the reigning champions‘ playoff hopes.

1500 spectators packed the Vukovi’s stadium and saw the home team get revenge for losing five out of previous six games against Kragujevac, shutting them out for the first time in the Wild Boars‘ history. Kragujevac had only two potentially scoring drives, but even those were squandered with two end zone interceptions, one by Ivan Nedeljković and one by Ivan Ristić.

For the rest of the game, the Vukovi used their long drives to score, while the Boars punted the ball away largely because of great play by the Vukovi’s linebackers Miloš Todorović and Dušan Lalić. Andrej Tasić led the Vukovi’s offense with another solid effort piling up passing and rushing yardage, without turnovers. They first scored on a 1 yard run by Lazar Nikolić on their first drive, and again in the second quarter when Jovan Golušin plowed his way to the end zone.

The Boars showed some signs of life early in the second half stopping the Vukovi inside their own 20 yard line twice, but the game was put away soon after that with a 41 yard beauty from Tasić to Dejan Cerovac.

Uroš Milić finished the Boars off with two long scoring runs in the fourth quarter when he was able to find room and run down the right sideline both times.

One of the Vukovi’s best, but least mentioned players, left tackle Petar Vitorović said the win against the Boars has no special meaning. ‚It doesn’t matter who we’re beating as long as we’re winning. I think our chances for catching Novi Sad are very realistic, the game in Novi Sad was our first game of the season, and we’re getting better as the season goes on.”

Dejan Cerovac caught his first touchdown pass of the season, overshadowing Pavle Tasić for at least one game. ‚Obviously I’m very excited and I hope we’ll continue this way for the rest of the year. This was my first game against Kragujevac, and I can only hope I’ll continue to bring good luck to the team”, said Cerovac.

The Boars coach vowed his team won’t quit because of three losses to begin the year. ‚My teams have always fought hard and that will happen this time too. We have injuries, we have problems, but we’re not giving up”, said Vujica Samailović.

‚The Vukovi were better in this game, and I’d like to congratulate to their players and coach. We fought well, as much as we could; we had some chances, we could’ve recovered two fumbles, but didn’t”, added Samailović. 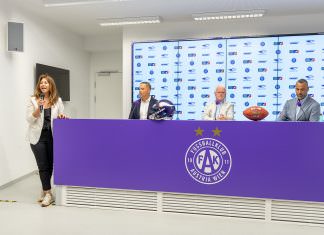