“It’s a good start to the season,” says Detroit Lions head coach JIM SCHWARTZ about his team’s 6-2 start. “We still obviously have half the season to go. We have a long way to go and we need to play well over the second half of the year. You don’t win any prizes or trophies for the first half of the season.”

Highlighting the unpredictability of the NFL this season have been comeback victories. Last week, the Baltimore Ravens erased a 24-3 deficit to defeat the Arizona Cardinals 30-27. It marked the fifth time this year that a team trailed by at least 20 points and came back to win. That is already the most in a single season in NFL history. Four times – 1983, 1987, 1995 and 1999 – a season had four teams overcome a 20+ point deficit to win.

“I’m proud of our guys,” says Ravens head coach JOHN HARBAUGH. “It’s pretty special. You’ve got to keep fighting. If you watch around this league, you can come back and win.”

There’s plenty of football still to be played, so don’t count anyone out.

Since 2000, 28 teams have reached the halfway point of their season with a .500 or below winning percentage and proceeded to the playoffs, including at least one in each season.

Of those 28 clubs, five have advanced to the Conference Championship Game, including the 2001 New England Patriots, who won Super Bowl XXXVI.

So as the season’s midpoint approaches, it’s all still to be decided. Some of the key games this week:

The Jets and Bills will meet on Sunday in a game between two AFC East rivals. Buffalo enters the contest tied with New England for first place in the division with the Jets just one game behind.

New York, which had a bye in Week 8, has won two games in a row, including a 27-21 come-from-behind win over San Diego in Week 7. In that contest, Jets wide receiver PLAXICO BURRESS had three touchdown catches (3, 4 and 3 yards) and became just the third player in NFL history to record three TD receptions of fewer than five yards in a game (Pro Football Hall of Famer LANCE ALWORTH, 1968; MARVIN HARRISON, 2006).

“We have a lot of confidence,” says Jets safety JIM LEONHARD. “Not just because we got some wins, but because of the style of football that we’ve been playing.”

Buffalo recorded the 21st shutout in franchise history last week, defeating Washington 23-0 at the Rogers Centre in Toronto, Canada. The Bills had nine sacks against the Redskins, the second-highest figure in team annals (11 at Denver, December 13, 1964).

“The sky’s the limit for this defense,” says rookie defensive tackle MARCELL DAREUS, who had a career-high 2.5 sacks last week. “As a group, it feels like we’re finally getting to the point where we’re together. We know what we can do if we really study and get after it.”

The Packers, who had a bye in Week 8, are the NFL’s lone unbeaten team and look to become the third defending Super Bowl champion (1990 San Francisco, 1998 Denver) to start the following season 8-0. Including the playoffs, Green Bay has won a franchise-record 13 consecutive games.

Packers quarterback AARON RODGERS leads the NFL with a 125.7 passer rating and is the first player in NFL history to start a season with seven consecutive games with a 110+ rating. He has passed for 2,372 yards and 20 touchdowns and is the only QB in NFL history with 2,300+ passing yards and 20+ TDs in a team’s first seven games of a season.

“He definitely gives us an edge,” says Green Bay wide receiver GREG JENNINGS of Rodgers. “He expects us to perform and we expect him to perform.”

San Diego returns home after a three-game road trip and the Chargers are 3-0 this season at Qualcomm Stadium. Quarterback PHILIP RIVERS is averaging 302.7 passing yards per game at home in 2011 and three of the team’s next four games are in San Diego. The Chargers enter Week 9 in a three-way tie for first place in the AFC West.

One of the league’s fiercest rivalries will add another chapter when the Steelers host the Ravens on Sunday night. Pittsburgh will look to avenge a 35-7 loss at Baltimore in Week 1.

“I guarantee you that the whole NFL shuts down next week just for this game,” says Ravens linebacker TERRELL SUGGS. “The whole world is waiting to see it, so I’m just happy to be a part of this game.”

Baltimore overcame a 21-point deficit in Week 8 to defeat Arizona 30-27, the team’s largest come-from-behind victory ever. Ravens wide receiver ANQUAN BOLDIN, who played seven seasons for the Cardinals and recorded 7,520 receiving yards, had 145 yards, the most in NFL history by a player in his first game facing a team for which he had at least 7,500 receiving yards.

The Steelers knocked off New England last week by a 25-17 score. Pittsburgh quarterback BEN ROETHLISBERGER, who passed for 365 yards and two touchdowns, recorded the 75th win of his career, accomplishing the feat in 106 starts. He is the fourth-fastest quarterback to reach 75 victories among QBs who began their careers in the Super Bowl era, trailing Pro Football Hall of Famer ROGER STAUBACH (99), TOM BRADY (99) and KEN STABLER (105).

“We’re just trying to win week to week and keep pace with the elite and put ourselves in position to be considered in that conversation,” says Steelers head coach MIKE TOMLIN about his 6-2 team.

The Bears and Eagles hope to keep winning streaks alive when the two 2010 playoff teams meet in Philadelphia on Monday night. Both teams have won two games in a row and are gaining momentum as the season enters November.

Chicago had a bye in Week 8 after recording a 24-18 win over Tampa Bay at Wembley Stadium in London, England. Running back MATT FORTÉ leads the NFL with 1,091 scrimmage yards and is the only player in the league with 600 rushing yards (672) and 400 receiving yards (419).

“There’s so much football to be played in the second half,” says Bears quarterback JAY CUTLER. “November and December are where you come together and where playoff teams are made.”

The Eagles got strong performances out of quarterback MICHAEL VICK and running back LE SEAN MC COY last week in the team’s 34-7 win over Dallas. Vick passed for 279 yards, two touchdowns and a 129.9 passer rating while McCoy rushed for a career-high 185 yards with two touchdowns.

“It’s always good to win in the NFL,” says Philadelphia head coach ANDY REID. “We can enjoy this win, but we have to get on to preparing for the Bears. They’ll be coming in here on Monday night and they have a good football team.”

November has arrived and wins against divisional opponents are in high demand as playoff races take form.
“Division games take on double importance,” says Buffalo Bills head coach CHAN GAILEY. “Not only can you get a win but you can give a division opponent a loss. So really it almost takes on double the impact that a normal game does.”
Week 9 features a trio of divisional games in the AFC starting with a matchup in the AFC East (CBS, 1:00 PM ET) as the New York Jets (4-3) and the Buffalo Bills (5-2) meet for the first time this season.
The Bills enter Week 9 tied atop the AFC East and are 3-0 at Ralph Wilson Stadium this season, including a 34-31 win over divisional foe New England in Week 3.
“This is a big game,” says Bills quarterback RYAN FITZPATRICK. “I think to say it’s any bigger than any other one – it is bigger in the sense that it is a division game. If you want to be playoff team you’ve got to win games in your division.”
The New York Jets return to action fresh off a bye and are one game behind Buffalo and New England. The Jets have posted a 2-0 record at Buffalo under head coach REX RYAN.
“We know what this game represents,” says Ryan, whose club has won five consecutive games in November. “You have Buffalo coming in as one of the hottest teams in the league, tied for first in our division.  We have to play at their place, so you have to be excited about playing the number-one rated team in our division.”
The highest winning percentage in division games from November until the end of season since 2002:

The Oakland Raiders (4-3) will host their long-time rivals, the Denver Broncos (2-5), on Sunday (CBS, 4:05 PM ET). The Raiders have won eight of their past nine games in the AFC West and rookie head coach HUE JACKSON knows how critical each game is in the second half of the season.
“Winning games in the division is very important to this organization and to this football team,” says Jackson, whose club is in a three-way tie for first in the AFC West with Kansas City and San Diego. “We are in the thick of this thing. We’re going to play two games in five days after this weekend, so this is a chance that we’ve got to grind and I think our players understand that. We can make up some distance here and we need to do that.”
The third AFC division contest in Week 9 features a showdown between AFC North rivals, the Baltimore Ravens (5-2) and the Pittsburgh Steelers (6-2), at Heinz Field on Sunday night (NBC 8:20 PM ET). Pittsburgh hopes to rebound from a 35-7 loss at Baltimore in Week 1.
“The root of the matter is, we have two very good football teams with the same intentions and that is to dominate the AFC North and put themselves in positions to chase the Lombardi,” says Tomlin whose team is 5-1 at home against Baltimore during his tenure (including postseason). “That is why we will always have issues with these guys because I expect that their goals will be unchanging like ours.”
The Ravens are still buzzing after overcoming a 24-3 deficit to defeat Arizona 30-27 in Week 8, but their focus has quickly shifted to Pittsburgh.

The teams with the highest winning percentage against division opponents since 2002:

In today’s NFL, more and more running backs challenge defenses in multiple ways. Whether it’s rushing the ball or catching a pass out of the backfield, these backs are finding ways to make an impact.

“Having a running back that can play every down makes it difficult to distinguish when a team is going to run the ball or pass the ball,” says Pro Football Hall of Famer MARSHALL FAULK, who ranks fourth all-time with 19,154 scrimmage yards and is the only player in NFL history to rush for 10,000 yards and catch 700 passes.

“It’s not even close,” says Bears quarterback JAY CUTLER when asked if Forté is the best running back in the NFL. “Look at what he can do on first, second and third down in the passing game and the running game, inside and outside.”

Forté has accounted for 43.6 percent of Chicago’s scrimmage yards this season. Since the 1970 merger, only four players have accounted for a higher percentage in a single season:

“The football IQ is off the charts with Matt,” says Bears offensive coordinator MIKE MARTZ. “And there are so many things you can do with him. His speed is really unusual. Getting him in the perimeter is a priority. He’s become a terrific inside runner. There really isn’t anything he can’t do very well or understand, which makes him pretty darn good.”

“He’s always got a smile on his face when he comes to work,” says Eagles head coach ANDY REID about McCoy. “He loves to play the game and he wants to be the best.”

McCoy leads the NFL with 58 first downs and 48 rushing first downs. His 754 rushing yards rank second in the league and he is fifth with 892 scrimmage yards (754 rushing, 138 receiving).

“LeSean is a dynamic player and he’s by far one of the best in this league,” says Eagles quarterback MICHAEL VICK. “He has great vision and the ability to make lateral cuts. There are not a lot of guys who can stop, and then with speed go sideways and stop on a dime. Plus he’s got good vision on top of that.” 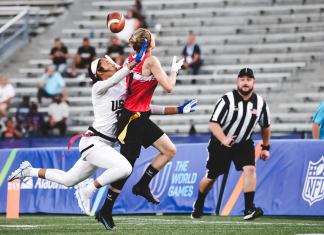