NFL’S FINAL EIGHT TAKE CENTER STAGE IN DIVISIONAL PLAYOFFS​
And then there were eight. The NFL heads into the Divisional Playoffs and all four games are rematches from the regular season, the first time that has happened since the 2010 season. Each of the remaining eight teams won its division, the first time all eight teams in the Divisional round were division winners since 2011.
On Saturday, January 14, the Atlanta Falcons (11-5), the NFC South champions, will host the NFC West-champion Seattle Seahawks (11-5-1) at the Georgia Dome to kick off the weekend (FOX, 4:35 PM ET). That night in primetime (CBS, 8:15 PM ET), the New England Patriots (14-2), who won the AFC East and secured the No. 1 seed in the AFC, will host the AFC South-champion Houston Texans (10-7) at Gillette Stadium.
On Sunday, January 15, the Kansas City Chiefs (12-4), the AFC West champions, will welcome the AFC North-champion Pittsburgh Steelers (12-5) to Arrowhead Stadium (NBC, 1:05 PM ET) and the Dallas Cowboys (13-3), who won the NFC East and secured the No. 1 seed in the NFC, will host the Green Bay Packers (11-6) at AT&T Stadium (4:40 PM ET, FOX).

“It is a whole new season now,” says Dallas quarterback DAK PRESCOTT. “Everything you do from this point on is really how you get looked at at the end of the year. So that is important to us, looking forward and playing a long time in this postseason.” 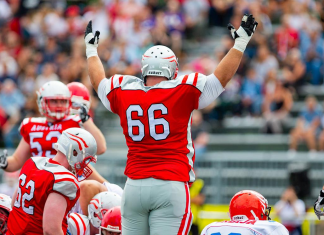