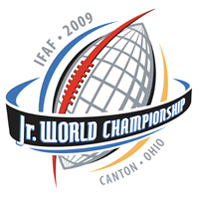 CANTON: The statistics were a bit lopsided for most of the IFAF Junior World Championship fifth place Playoff game on Saturday at Fawcett Stadium.

Team Sweden led most of the offensive statistics.
Germany controlled the only one that mattered.
German return man Nico Lester returned a punt 58 yards with 21 seconds remaining in the first quarter and caught a 28-yard touchdown pass in the fourth as Team Germany slipped past Sweden 14-0.

The low scoring affair should come as no surprise to anyone familiar with the two programs. Germany drew the European Federation of American Football’s top seed for the IFAF Junior World Championship this week by beating Sweden 9-6 in last year’s European Junior Championships.

"They were really focused on (this) game because it was a rematch of the European Championships and whatever you do here, we are still No. 1 in Europe," Team Germany coach Peter Springwald said of his players.

In this contest, Sweden could never get the big play when it needed it the most.

It looked like Sweden was poised for a score early in the second quarter when quarterback Fabian Soederberg found Sebastian Gauthier for a 25-yard gain, but immense pressure from the German defensive front forced Soederberg to make an errant pass a few plays later, turning the ball over on an interception.

Later in the quarter, receiver Damien Scanella uncoiled a 46-yard completion to Gauthier, who led Team Sweden with 104 receiving yards on four catches and was the team MVP; only to see the drive stall a few plays later at the German 38.

Germany seemed to get the only lucky break before halftime when Lester broke numerous tackles and stiff-armed a player during his punt return for a touchdown.

"I’d have to say, it was a lucky one because the snapper came right through," Lester said.

At halftime, Sweden had 118 passing yards to Germany’s 26 and led in rushing yards as well 72 to 37. The offensive woes sent Germany into the locker room looking to make a few adjustments despite leading 7-0.

‚"We made some adjustments on the offensive line," Springwald said. "We changed the blocking scheme (and) that worked well for us. They stepped up and did the plays for us. The running backs stayed in the lanes and we made some yards."

Germany rushed for more yards in the fourth quarter with 104 yards than they had the first three (85 yards).

"Another great game against Germany," Team Sweden coach Jan Jenmert said. "Great by the sense that it was a game, at least for a half and then the second half we were overpowered and hard a time to get things going on offense."

Running back Randall Payne led Team Germany with 145 yards rushing on 21 carries. He had just 20 yards in the first half. Hampus Hellermark ran for 54 yards on 16 carries for Sweden.
###

"It’s good for us to finish with a victory," France Olivier Moret said. "This win was important."

A late 22-yard halfback pass for a touchdown from Thomas Ruiz to Yoan Boireau put the French over the 100-yard passing mark (108) on the day.

Running back Adrien Mochez got the scoring started when he found the end zone from nine yards away with 4:55 remaining in the first quarter. It would be his first of two touchdowns in the game. He finished with 51 rushing yards as the French posted a 21-0 halftime lead.

Ruiz, who had 35 rushing yards on three carries, and receiver Alan Howell, each had rushing touchdowns as well as France stymied New Zealand with misdirection and trick plays. Running back Steven Joacin led France with 103 rushing yards on 13 carries.

"We got confused quite badly, especially after those motion plays," New Zealand head coach Michael Mau’u said. "We tried to make some adjustments at halftime, which seemed to work for us, but by then we were playing catch up."

New Zealand got its first score of the game with about five minutes remaining in regulation. Running back Matthew Gandy capped a 13-play drive with a 14-yard touchdown run through the French. The run was Gandy’s longest of the game. He finished with 86 rushing yards on 17 carries for the Kiwis.

Although the underdogs from Oceania did not win a contest in the 2009 IFAF Junior World Championships, they said that there is still plenty to take back home to New Zealand.

New Zealand did not realize the scope of American football before the tournament, Gandy said. Besides the memories, the players and coaches plan on returning to New Zealand with new techniques and weight training programs to make its program better for the next time around.

"This experience is life-changing for all of us," Mau’u said. "The boys, this will be something they will carry with them all the time, irrelevant of the results."