More than 50 athletes from countries including American Samoa, Australia, Brazil, Estonia, Finland, Germany, the Netherlands and Sweden are playing college football in the United States this season. Each week the International Federation of American Football (IFAF) will highlight the top performances of international players on www.IFAF.org and www.Facebook.com/IFAF.org.

Florida State capped off its nine-win season by defeating Notre Dame 18-14 in the Champs Sports Bowl, scoring 18 unanswered points in the second half to secure victory.

Werner represented Germany at the inaugural 2009 IFAF Junior World Championship held in Canton, Ohio and played junior football in his homeland with the Berlin Adler before launching a standout prep school career at the Salisbury School in Connecticut as a member of the USA Football International Student Program.

Another former IFAF World Team member JESSE WILLIAMS, who began his football career in his native Australia, will face the LSU Tigers in the 2012 BCS National Championship when he lines up at defensive end for Alabama on Monday, January 9 at the Mercedes-Benz Superdome in New Orleans, Louisiana (kickoff 7.30pm CST).

Williams started each game at defensive end finishing the season with 22 tackles including four for a loss of yards. Prior to committing to Alabama, Williams played two years of junior college football at Arizona Western College and was named #2 Player in the Rivals.com 2011 JUCO Top 50. His football career began in Australia at the age of 14 for his club team in Brisbane. He also played on the IFAF World Team at the 2010 USA Football International Bowl.

LSU features an Australian in punter BRAD WING who helped the Tigers to their 11th league title, defeating Georgia 42-10 in the SEC championship game. The talented punter from Melbourne came to LSU after spending one season at Parkview Baptist in Baton Rouge. Prior to that, he played Australian Rules Football for 15 years. His father David punted for the Detroit Lions and the Scottish Claymores of NFL Europe.

Another Dutch native, defensive tackle STEPHEN RUEMPOLHAMER was a mainstay of the Iowa State defense this season, finishing the regular campaign 6-6 as he registered 29 tackles. His Cyclones suffered a 27-13 loss to Rutgers in the New Era Pinstripe Bowl played at Yankee Stadium on December 30.

Thanks to big plays on offense and even bigger plays on defense, NC State downed Louisville 31-24 in the 2011 Belk Bowl in Charlotte on December 27. German native MARKUS KUHN, who played for the Weinheim Longhorns in the German Football League, played in all 12 games for NC State this season, registering 47 total tackles. In the bowl win, defensive end Kuhn registered three tackles including a sack for a loss of six yards.

SEUNG HOON CHOI lined up at offensive tackle for Nebraska in a 30-13 Capital One Bowl loss to South Carolina on January 2. Choi, a native of Seoul, South Korea, played high school football at Lincoln Christian High School where he earned honorable-mention all-state honors in Class C-1 his senior year.

As the bowl series continues, two conference champions, No. 15 Clemson and No. 23 West Virginia will meet in the 78th Discover Bowl on Wednesday, January 4, 2012 at Sun Life Stadium in Miami Gardens, Florida. The game kicks off at 8pm ET and will be televised nationally on ESPN. German native and former USA Football International Student Program member CURTIS FEIGT played on the offensive line for the Mountaineers this season.

Both teams enter the Discover Orange Bowl with two of the top offenses in the country and both are ranked in the top-15 in passing offense and top-30 nationally in scoring offense and total offense.

The SMU Mustangs and Pittsburgh will square off in the sixth annual BBVA Compass Bowl on January 7 at noon CT at the historic Legion Field in Birmingham, Alabama, live on ESPN. SMU finished the 2011 regular season 7-5 with the help of Estonian defensive end MARGUS HUNT who holds the NCAA record of blocked kicks with eight.

The Mustangs and Panthers have played five times previously with the series tied at 2-2-1. Pittsburgh finished the regular season 6-6 and 4-3 in Big East play and is the first team to play in the BBVA Compass Bowl for the second time having defeated Kentucky 27-10 last year. This will also be the Panthers‘ fourth consecutive postseason appearance.

SMU will be playing in its third consecutive bowl game and its 14th all-time appearance. The Mustangs finished the 2011 regular season 7-5, winning at least seven games for the third straight season. SMU last faced Pitt in the 1983 Cotton Bowl with the Mustangs claiming a 7-3 win en route to an NCAA-recognized National Championship as awarded by the Helms Athletic Foundation. 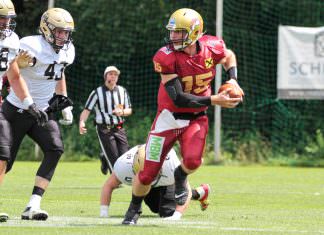