FOR IMMEDIATE RELEASE – WEDNESDAY, NOVEMBER 23, 2011 – The International Federation of American Football has announced the first 12 players named to the IFAF World Team roster that will face Team USA in USA Football’s International Bowl on Wednesday, February 1 in Austin, Texas.

The state capital will host the third annual game – formerly known as USA vs. The World – when an IFAF World Team of teenage football players led by Canadian head coach GREG MARSHALL takes on American’s Under-19 National Team, composed of current high school seniors (class of 2012). Both teams will field a 50-player roster for the game at The Palace Round Rock ISD Stadium in Austin.

Eight of the 12 IFAF selections will be prepared for what lies ahead in Austin as they boast either previous World Team or Development Team experience.

“It is important that we are able to bring back some experienced players who can become leaders on our team during what will be a short time together to prepare to face Team USA,” said coach Marshall. “There are some very talented players emerging around the world and I am excited to work with them and to announce further selections in the coming weeks.”

Returning at wide receiver is 2011 IFAF World Team MVP, Canadian TEVAUN SMITH, who scored the first ever touchdown conceded by the U.S. U19 national team in all competitions when he returned a kickoff 79 yards to the end zone when the teams met in February 2011. Smith plays at the Kent School in Connecticut and has helped his team to six straight wins to open the current season.

Two more Canadians, offensive lineman MATTHIAS GOOSSEN of Simon Fraser University and defensive back MARCUS GRANDISON of York University, were also members of the 2011 IFAF World Team as was Austrian pair, running back ANDREAS HOFBAUER and wide receiver LAURINHO WALCH. Earning a third selection is defensive end DAVID KATINA from American Samoa, who lined up for the IFAF World Team in both 2010 and 2011.

In 2011 IFAF established a Development Team Program for younger players and two prospects who have progressed to the full IFAF World Team roster are Australian offensive lineman ADAM GOTSIS and Japanese running back SHINGO MAEDA.

In order to be eligible for the IFAF World Team program, players must be nominated by their national federation and are evaluated by the coaching staff based on film review and weekly training log results collected through the IFAF World Team web portal. The selection and announcement of players to both the final roster and Development Team will continue on an ongoing basis until all positions are filled. A limited number of roster spots will be available for players promoted from the Development Team during training camp.

In 2011 the IFAF World Team narrowly lost 21-14 to Team USA at Westlake High School in Austin, and in 2010, the Americans were held scoreless until the final play of the first half before going on to win 17-0 at Lockhart Stadium in Fort Lauderdale, FL.

David Katina, DL, American Samoa, 6-3, 250, Hawaii (grey shirt)
Returns for his third consecutive year as a member of the IFAF World Team… was a grey shirt at Hawaii… has played football for 14 years… played flag football and Pop Warner for Ewa Beach Cardinals… played JV football at Word of Life and then varsity football at Campbell High School… played at Marist High School… represented American Samoa in a 49-6 junior international victory over Australia in January 2010… greatest football memory is when his entire family came to watch a game this past year… the people who have most influenced his life are his parents, particularly his mother, who has always taught him how to keep priorities straight and was the main person keeping him in check with everything including football. She is a coach on and off the field… favorite current NFL player is Dwight Freeney and favorite NFL team is the Cincinnati Bengals… sings and plays the drums… favorite music is Samoan, Christian and Island Jams… speaks English and partial Samoan… looks forward to the experience of working with other great players from around the globe.

Sonny Sanitoa, DL, American Samoa, 6-4 235, UNLV
Completed his freshman year at University of Nevada Las Vegas… was a four-year letterman playing for coach Simon Mageo at Samoana High School… registered more than 30 tackles along with 7.5 sacks as a senior for the Sharks… was a two-time all-league selection… also lettered in baseball as a pitcher and first baseman and basketball as a center and power forward.

Andreas Hofbauer, RB, Austria, 5-11, 206, Swarco Raiders
Plays for the Austrian powerhouse Swarco Raiders Tirol… has five years of football experience… three-time offensive MVP… three-time Austrian championship MVP… greatest football memory was winning the 2011 European Junior Championship with Austria and the Austrian Bowl and Eurobowl with the Raiders, all in 2011… named Tournament MVP of the 2011 European Junior Championship in Spain and scored three touchdowns in the Gold Medal game… most influential people are his mother and father who have always supported him and taught him the importance of sports which is not only physical but learning… speaks German, English and Spanish… also competes in Track & Field… favorite NFL player is Maurice Jones-Drew… favorite NFL team is Philadelphia Eagles.

Laurinho Walch, WR, Austria, 5-11, 148, Raiffeisen Vikings
Currently plays for the Raiffeisen Vikings… has seven years of football experience… won the 2011 EFAF European Junior Championship with Austria and led the team in receiving in the Gold Medal game… began his football career with the Dark Angels flag football team… a two-time Judend Bowl champion and one time runner up… helped team to a College Bowl victory… his team finished third at the IFAF Flag Football World championship in Netherlands… scoring first career touchdown was greatest football memory… his family are the most influential people in his life… speaks German, English and Spanish… favorite NFL player is DeSean Jackson… favorite NFL team is Detroit Lions.

Tevaun Smith, RB, Canada, 6-1, 187, Kent School
Wide Receiver Tevaun Smith finished his post-grad first year at Kent School, a Preparatory school located in Kent, Connecticut… has been playing for ten years… first-ever player to score a touchdown against a Team USA Team in the 2011 Team USA vs. the World game… previously played at Chaminade School… played for the IFAF World Team in 2010 scoring on a kickoff return… greatest football memory is defeating the No. 1 ranked team in NESPAC conference in New England… looking forward to meeting and playing with the best players from around the world… favorite NFL team is San Diego Chargers…favorite NFL player is Dez Bryant.

Matthias Goossen OL, Canada, 6-3, 290, Simon Fraser University
Matthias Goossen, an offensive lineman from Canada, completed his first season with Simon Fraser University… has been playing for 11 years… helped SFU defeat Dixie State in triple overtime for the school’s first conference win in NCAA DII play…previously played for Richmond Raiders and Vancouver College Prep… named Best Lineman in Grade 10 & 11 and Team MVP in Grade 12… looking forward to playing against the top players from the United States… speaks French and English… favorite NFL team is Indianapolis Colts… favorite NFL player is Peyton Manning… future ambition is to get a degree in communications from SFU and play in the CFL.

Shingo Maeda, RB Japan, 5-10, 191, Kansai University
Plays for Kansai University… named to the first-ever 2011 IFAF World Development Team… selected to the 75-man Japanese Senior National team before the cutdown to 45 players who represented Japan at the 2011 IFAF Senior World Championship in Austria… the person who has most influenced his career is Japanese coach and former NFL Europe player Masato Itai… favorite NFL player is Adrian Peterson on the Vikings… favorite NFL team is the Philadelphia Eagles… His ambition is to play in the NFL. 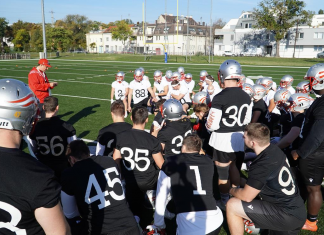