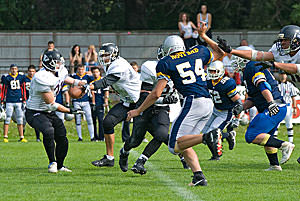 On 4th down with less than two minutes to play, Čaba Juhas lunged across the 50 yard line on a quarterback sneak that sealed the faith of the Kragujevac Wild Boars and left them winless for the fourth game this season. Had he failed, the Wild Boars would have been in good position to steal this game away, after being down for three and a half quarters, but the controversial play call got the Novi Sad Dukes the 23:14 win that puts them in the playoffs for the 2007 season.

Kragujevac lost for the fourth time this season, but unlike their 30:5 home loss against the same team earlier this season, they made the game somewhat competitive and in the end, thanks to a late surge were even in a position to win.

Juhas‘ touchdown passes to Jovan Kleut and a 97 yarder from his own end zone to Petar Tomić helped build a 17:0 lead in the first half. There was no blowout this time though, as the Boars tightened up in the second half and didn’t allow a point until the final minute. Juhas was also intercepted twice by Marko Košutić of the Wild Boars and similar to the Vukovi game, Dukes lost their double digit lead late in the game.

After Vladislav Petković kicked a 37 yard field goal in the second quarter, the game turned into a stalemate on most drives and there were no points until late in the game when the fireworks began.

The Boars finally finished one drive with a touchdown when Nemanja Trajković passed to Marko Radivojević for his first touchdown pass of the year. The pass that was tipped in the air around the goal line got to Radivojević who somehow managed to catch it. After Novi Sad was forced to punt, Trajković threw a 76 yard pass to Ognjen Nikolić who was completely forgotten near the sideline and had no problems running all the way to cut the lead to three points. And just when the Wild Boars thought they will have the final say, Juhas picked up the first down on fourth down and two plays later ran 51 yards for the final points. Petković missed the extra point.

‚In the end it was loss of concentration and our confidence was too great before the game. I know they can run as fast as their opponents and I have no other explanation for the Boars‘ second touchdown other than that”, said Predrag Nikolić, coach of Dukes. ‚We have problems keeping the lead we make. Today we were without running backs Đanić and Grbić that can pick up significant yardage and that played a part‘, he added.

‚I can’t be more pleased with the way we played today. We played relaxed, with a lot of heart. People have to understand that our team is going through a transition, we lost ten players we counted on since last year, and we also had a lot of injuries”, said Marko Košutić.