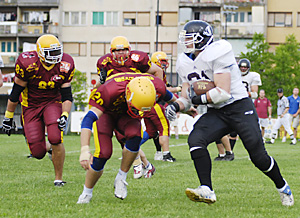 Despite missing five starters overall including four on defense, the Vukovi Belgrade managed their third straight convincing win, this time in Kragujevac. Briton Burge didn’t come off the bench this time instead starting at quarterback. He threw for three touchdowns and scored on a 1-yard-run.

Andrej Tasić was pretty much everywhere, lining up at wide receiver, occasionally at running back and tight end and even subbing for the missing linebackers. As a receiver he caught four passes including two touchdowns in the first half.

Überlegene Wölfe trotz Personalsorgen
Like in their game in Belgrade, the Boars were no match for the Vukovi losing 41:10 for their fifth loss of the season. Belgrade beat the Boars 34:0 and the Silverhawks 41:0 at home before defeating Kragujevac once again thus continuing the streak of strong performances in the first half of the season.

If the Vukovi had any concerns because of their missing starters, those were quickly put to rest when they scored five touchdowns in the first half. Jovan Golušin put the Vukovi on top with a 1-yard-touchdown run, after which Tasić caught his first touchdown. The Wild Boars scored their only points of the first half when Darko Cvetković caught the tipped extra point attempt and scored two points.

Wild Boars Offense lief sich fest
Belgrade scored three touchdowns in the second quarter, one on another catch by Andrej Tasić on a field goal fake, a 90-yard-catch by his brother Pavle and a 55 yard interception return from Vladimir Božović. Božović, former player of the Legionaries and current Vukovi II player, played his first game this season and along with other part time players like Dimitrije Cvijović and Marko Rudić did a good job on the Vukovi’s defense.

The Wild Boars didn’t try much, running up the middle most of the time, as if they were trying to burn the clock and on one such drive in the second half Aleksandar Ristić finally got in the end zone scoring on a 4-yard-run. They also added a safety after tackling Golušin in the end zone before Burge scored on a 1-yard-run for the final points.

Stimmen nach dem Spiel
‚Maybe we could’ve done a little better; we were too nervous and the penalties killed us early on. Still, the Vukovi are a good team”, said Aleksandar Ristić. ‚For the rest of the yeae, since we’re playing at home against two abroad teams, which are teams we have to respect and we’re not as good as we were last year for a lot of different reasons, I expect everyone to give 100% of what they can”, he added.

‚It was a great game, a lot of fun; both teams played well. We’ve been working a lot lately, practicing new plays. In the second half we came out slow, but they looked good too. Our defense played strong the entire game”, said Briton Burge, the Vukovi’s starting quarterback. For this game at least. 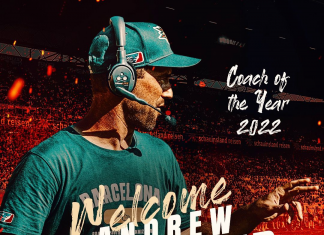