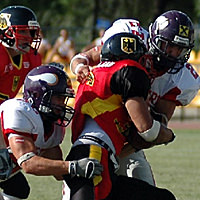 THURSDAY, JULY 16, 2008 – Sevilla, Spain – A solitary touchdown and extra point was enough to earn Germany a 7-0 victory over Austria and see them through to the final of the European Junior Championship where they will face Sweden at 5pm local time on Sunday, July 20 at the Estadio C.A.R. La Cartuja.

Defeat for Austria pushed them down into the fifth place playoff game and handed Denmark, earlier 46-6 victors over Finland, the opportunity to face France for third place (10.30am). The top three nations at the EJC will represent the European Federation of American Football (EFAF) at the 2009 IFAF Junior World Championship in Canton, Ohio next summer.

Denmark, Austria and Finland all finished tied in Group B with identical 1-2 records behind Germany (3-0) and the Danes‘ superior points differential among the tied opponents won the tiebreaker. Austria will face Russia on Saturday, July 19 in the San Pablo Stadium at 6pm after Finland takes on Spain at the same venue at 10.30am.

Germany’s decisive touchdown came with 1.42 remaining in the first quarter when Gregor Lietzau, who plays at the Kent School in Connecticut as part of the USA Football International Student Program, caught a lofted 71-yard pass from quarterback Robert Demers. Three times Austria drove to within the red zone, but was twice denied on fourth down the German defense and also missed a field goal.

Denmark needed a victory over Finland and a Germany win to secure a place in the third place playoff game and stormed to a 21-point lead on a total of only ten offensive plays. Thomas Feer rushed for a 14-yard touchdown, Kevin Gangelhoff, another ISP student from Kimball Union Academy (NH) caught an 11-yard touchdown and Feer dashed 75 yards to score with the game still in the first quarter.

Despite Finland reducing the arrears, Feer added a third score on the ground, while quarterback Jesper Johnsen finished the game with 19 of 26 pass attempts completed for 309 yards and 3 touchdowns.

‚We had a gameplan to win by 36, which we thought would be enough,” said Denmark head coach Lars Carlsen. ‚This was a fantastic game, the offence did a tremendous job, great game by the quarterback and the running back and also the coaching staff, who watched a lot of film.”

In conjunction with hosting the EJC, the southern Spanish city of Sevilla will be the venue for the International Federation of American Football (IFAF) annual Congress on Friday, July 18. Delegates representing the majority of the 50 IFAF member countries will attend the Congress.

Topics on the Congress agenda will include the election of the IFAF President and executive committee for a four-year term and the ratification of countries as full members of IFAF. Among those countries under seeking full membership are the Bahamas, Brazil, Bulgaria, India and Turkey. Congress delegates will also vote on a proposed change to IFAF statutes to allow Puerto Rico and American Samoa to become members and will recognize Oceania as a continental federation of IFAF, joining AFAF (Asia), EFAF (Europe) and PAFAF (Pan-America).

IFAF President Tommy Wiking, who is seeking re-election, said: ‚This is a very important meeting, particularly in terms of the growth of the worldwide American Football family.