The game will be played on Sunday, October 31 at Wembley Stadium in London at 1:00 p.m. ET (5:00 p.m. UK).  CBS will provide live television coverage in the United States.

The 49ers and Broncos are among the most decorated franchises in NFL history, combining for seven Super Bowl victories.

‚For the past three years we have seen the extraordinary passion that exists for NFL football in the UK,” said NFL Commissioner Roger Goodell. ‚We want to continue to build on that passion by strengthening our ties to our existing UK fans and creating new ones.”

The 49ers, five-time NFL champions, will take part in their second international regular-season game and first as the home team. One of the world’s most popular NFL franchises, San Francisco faced the Arizona Cardinals on October 2, 2005 in Mexico City in the first international regular-season game in league history, helping attract a crowd of 103,467 to Azteca Stadium.

‚The 49ers organization is excited to be part of the NFL’s 2010 international schedule,” said 49ers President and CEO Jed York.  ‚London is a wonderful venue for two of the most storied franchises in NFL history to square off.  The international games have been so well received that it will surely be an exciting experience for our players, coaches, staff and fans. We support the league’s initiative to bring NFL games to the international stage, and look forward to playing in front of our fans in England.”

The Broncos, two-time Super Bowl champions, played in seven international preseason American Bowl games, including in London in 1987.  They return to the UK to play against the team they faced in Super Bowl XXIV in 1990.

‚The Denver Broncos are honored to play in London against the 49ers as part of the NFL’s International Series,” said Broncos President and CEO Pat Bowlen.  ‚Our organization has been fortunate to play in several American Bowls in previous years, including one in London, but to play a regular-season game overseas is truly special.  It’s a wonderful, historic opportunity for our franchise and will be an unforgettable experience for our players, coaches and fans.  I’m excited for the game in London and am thrilled that the Broncos will be part of the NFL’s continued international growth.”

The NFL is continuing to explore the possibility of playing a second game in the UK in 2010.

A look at the three regular-season games played in the UK, all before sellout crowds: 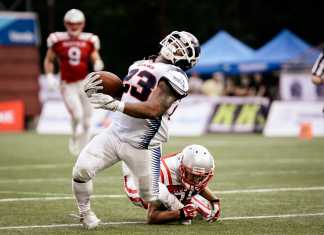