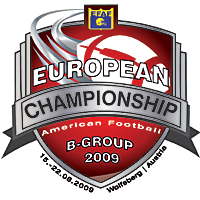 This summer, six nations will play for the European Championship (B-Group) of American Football: The Czech Republic, Denmark, Italy, Russia, Spain and the hosting nation, Austria. The tournament will take place from August 15th to August 22nd in Carinthia, Austria’s southernmost and thereby most sunny State.

Two years ago the European Championship (C-Group) was already held successfully in the city of Wolfsberg – a picturesque district capital, about thirty minutes away from the state’s capital, Klagenfurt. After rebuilding the local stadium for costs of almost two million Euros this venue is again well prepared for the return of Football and all its ‚big men”. The European Federation has decided in favour of Austria, as being host to the next European Championship (B-Group), due to the fact that its Federation is well known for a great mobilization of fans, media and investors.

The president of Austria’s Federation, Michael Eschlböck, is already excited to prove that putting trust in Austria’s big football family is exactly the right thing to do now: ‚This is a great chance, not just for the six teams trying to qualify for the next European Championship, which will be held in Germany in 2010, but also for the people of Austria: This country has a great history in hosting major sports events.” – Right now, the preparations for the European Championship (B-Group) of American Football in Austria are in full activity: ‚We can’t wait to welcome all the participating teams”, says president Michael Eschlböck of the Austrian Federation. ‚We want to ensure that all the people involved in the event will have a great time in Austria. We want everybody to enjoy a week of summer, fun and American Football with us.”
The European Championship (B-Group) 2009 will be held in Wolfsberg, Austria
Date: Aug., 15th-22nd
Participating Teams: Austria, Czech Republic, Denmark, Italy, Russia and Spain
Travel Information:  http://www.wolfsberg.at/
Austrian Federation of American Football: http://www.afboe.at